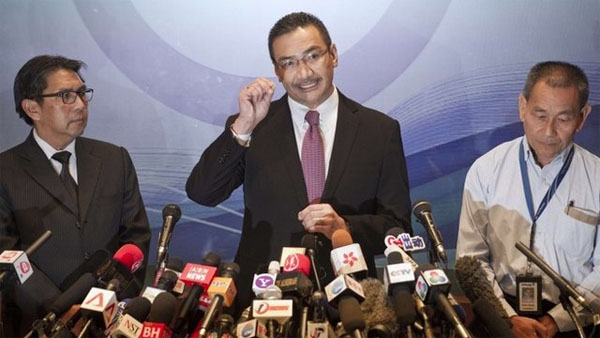 (BBC) — Chinese satellite images that were said to show debris from a missing Malaysian airliner were released by mistake, Malaysia’s transport minister says.

Hishammuddin Hussein also denied a US report that the Boeing 777 might have flown for hours after contact with air traffic control was lost.

Flight MH370 from Kuala Lumpur to Beijing went missing late on Friday, with 239 passengers and crew on board.

The minister said the disappearance of the plane was unprecedented.

Mr Hussein told reporters at Kuala Lumpur International Airport that the Chinese embassy in the Malaysian capital had said the satellite images were released by mistake and “did not show any debris from MH370”.

The grainy satellite images were released by China’s State Administration of Science on Wednesday.

Mr Hussein also denied a report in the Wall Street Journal that the plane had sent engine data to the ground for more than four hours after it lost contact with air traffic control.

He said that his team had spoken to Malaysian Airlines and Rolls-Royce, the engine’s manufacturers, who both said the report was “inaccurate”.

“The last transmission from the aircraft was at 01:07 which indicated that everything was normal,” Mr Hussein said.

He added that efforts to locate the aircraft were ongoing, promising to “spare nothing in our efforts to find MH370”.

“There are currently 43 ships and 40 aircraft searching the South China Sea and Straits of Malacca,” he said.

In a separate press conference in Vietnam, an air traffic official said five ships and three aircraft had been sent on Thursday to the area indicated by the Chinese satellite images but had found nothing.

The BBC’s Nga Pham in Vietnam says the official declined to answer a question on whether he was frustrated with Malaysia’s communication and co-ordination, referring the matter to the foreign ministry.

He said Vietnam would continue to search for the plane on Friday.