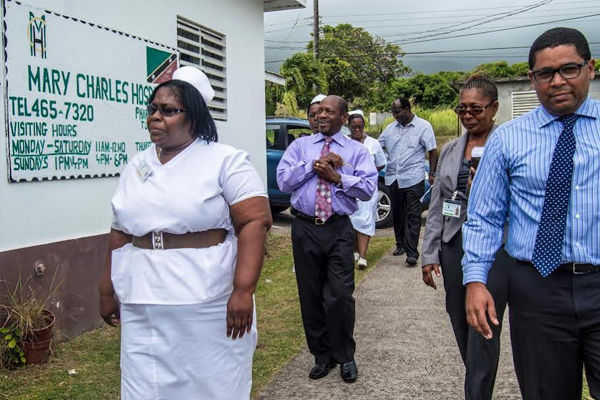 Mary Charles to be Upgraded in Next Fiscal Year

Basseterre, St. Kitts, (SKNIS) — St. Kitts and Nevis Prime Minister the Right Honourable Dr. Denzil Douglas has assured that plans to upgrade the Mary Charles Hospital in Molineux, into a tertiary-level health institution, will come to fruition in the very near future.

“The physical outlay of this facility has to be improved and will be improved,” Prime Minister Douglas emphasized. “We need to extend the services to include radiological services as well and be able to do limited blood works as part of the diagnostic batch of tests that we provide from this facility.”

Prime Minister Douglas made these remarks during his Out and About series, when he dialogues with the staff of various establishments. On this occasion he took the opportunity to meet with the three patients at the Mary Charles Hospital.

It was further emphasized that as an integrated health care structure, Mary Charles would be scaled up to provide tertiary-level health care, similar to what takes place at the Pogson Medical Centre. Mention was also made of the professionalism of the doctors who service the hospital, specifically Dr. Bassey Udo, Dr. Garfield Alexander and Dr. Vance Gilbert.

Details as to the exact changes were outlined by Permanent Secretary in the Ministry of Health Andrew Skerritt. He also confirmed that the renovations to Mary Charles would commence in the 2015 fiscal year while mentioning another key aspect of a healthy environment.

“We will put our Environmental Health Office right under this facility, so that we can help to inform, educate and reduce incidents of vector-bourne diseases,” Mr. Skerritt revealed. “There’s a lot of talk about chikungunya out there, of course this is endemic right now in the Caribbean Region. I would like to advocate that source reduction is important, so persons would have to be responsible for ensuring that containers that can be filled with water, and breed mosquitoes are not on their property.

“The Ministry will continue to do its work, carrying out fogging and of course education and promotion with respect to reducing incidents of chikungunya.”

Minister Liburd gave an update on the National Health Insurance Scheme noting that the next phase was to ensure that persons who receive minimum wage were covered.

During the question and answer period support and auxiliary staff raised matters such as the dispensing of medication to the elderly, at-home follow-up care of the mentally disabled and the desire for more training. Mr. Skerritt also took the opportunity to update on the proposed Mental Health Day-Treatment Centre. He explained that the facility would provide such services as counseling, group therapy and occupational therapy as well as encourage adherence to one’s medication schedule.