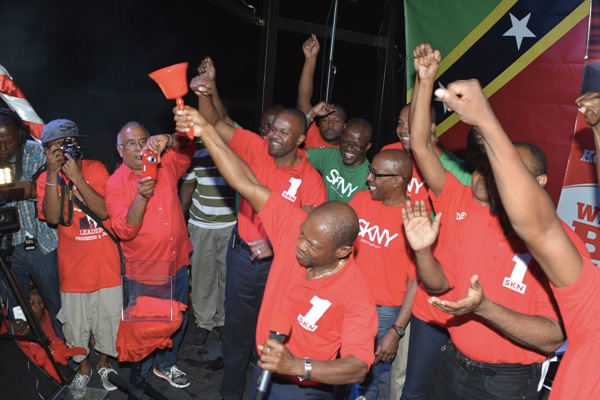 In the presence of over 8,000 persons, the eight (8) St. Kitts-Nevis Labour Party (SKNLP) and the three (3) Nevis Reformation (NRP) candidates contesting the Federal Elections, assisted the SKNLP National Political Leader in ringing the bell.

“Tonight we have rung the bell in Constituency Number Three and we shall have all eleven seats!” Dr. Douglas told the massive crowd.

Prime Minister Douglas urged his supporters to spread out with Labour’s message.

A confident Prime Minister Douglas, who is seeking an unprecedented fifth consecutive term used the opportunity to invited supporters of the People’s Action Movement (PAM), the People’s Labour Party (PLP and the Concerned Citizens Movement (CCM) “and those who call themselves Unity to crossover. We have open arms. We have enough room for them!”