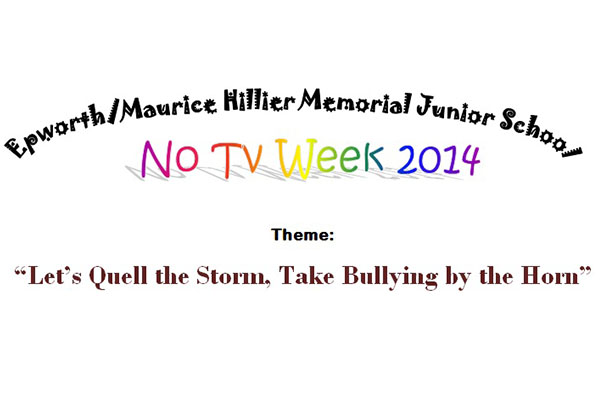 (ZIZ)– Students of the Maurice Hillier Memorial Junior School are again being encouraged to stay away from television for an entire week.

The school today officially launched its No TV Week Campaign, now in its 14th year.

During a recent airing on Upfront, school Chaplin, Reverend Arlene Bruce-Williams, said they are hoping this week can help bring families closer together.

“It is an opportunity for the children’s parents to be involved more socially, to interact other than in front of the television,” she said.   “It’s an opportunity perhaps for parents and children to read together, to play games, to sing together, to have fun aside from just in front of the television that seems to occupy so much of the children’s time.”

The theme for this year’s No TV Week is “Let’s Quell the Storm, Take Bullying by the Horn.”

Reverend Williams outlined why they chose to focus on bullying.

“Even in St. Kitts it is an issue and as children either are bullied, are bullies themselves or witnessing bulling they learn certain behaviours and if we don’t highlight this and try to quell the storm as the theme says, I think we will allow the children or encourage the children along a path of habitual behaviour that is not positive,” she said.

Some of the sub-themes that will be depicted during No TV Week include “The Stamp out Bullying Campaign” on Monday, “Bullying Makes Us Crazy” on Tuesday and “Pair Up Against Bullying” on Wednesday.

There will be a concert held on Thursday evening at the school and the week of activities ends on Friday with a parade through the streets of Basseterre.