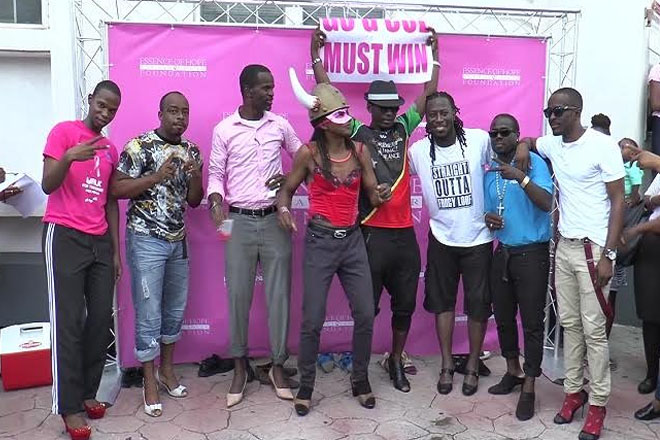 (ZIZ News) — Downtown Basseterre was buzzing with excitement on Friday afternoon as a group of popular male personalities in St. Kitts wore heels for a good cause.

The occasion was the inaugural “Men in Heelz” Celebrity Dash, organised by the Essence of Hope Breast Cancer Foundation.

The event, held at Bank Street in Basseterre, also featured the likes of Piece-A-Man and Mr. Hype.

ZIZ News caught up with G-Cue on Saturday, who said it was an easy decision for him to take part in the Breast Cancer awareness campaign.

“My reason for taking part in this Men In Heelz Celebrity Dash so to speak was simple, the ladies were here on this show from Essence Of Hope and we talked about it, it sounded like a great idea, we laughed about it and I said you know this would be great to take part in and bring some more awareness to the whole breast cancer awareness. Lulu called in and was like ‘you gotta go, you gotta go’ and I was in. Second of the concept and the feeling so I just ran with it and I thank everybody who came out and supported all of us who were there,” he said.

He hopes that through the small gesture, he was able to help spread the message of Breast Cancer and the importance of early detection.

“Bottom line, the word get out that Breast Cancer is here, it’s real and just be more aware of it. Ladies go and get your screening done at an early point. Don’t wait until it’s too late because I heard early detection makes your situation a lot better. So for me, that’s basically it and I had fun,” he said.

It was followed by the lighting of the Berkeley Memorial, which brought the curtains down on the month-long observance.