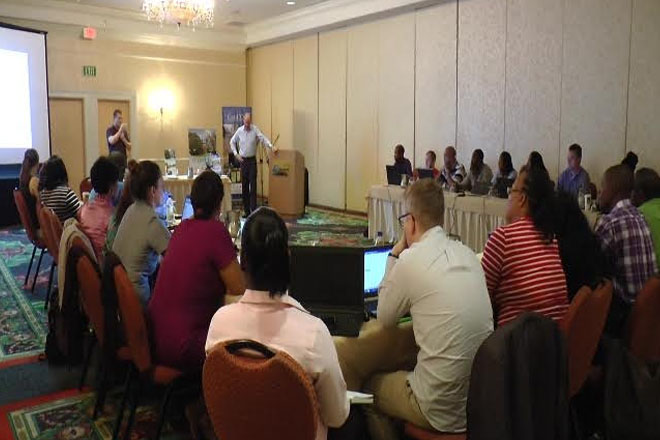 Meteorologists and the Media

(ZIZ News) – Meteorologists and other officials from around the region are, this week, learning how to work with the media to spread useful information to the general public.

BBC World News Anchor, David Eades has been training the professionals at a workshop at the St. Kitts Marriott Resort.

He told ZIZ News why the course is necessary.

“I think one of the biggest challenges for scientists generally, Meteorologists among them, is how do you get your information, your message over to people who don’t necessarily understand the subject in the way that you do; that’s most of us, basically,” Eades stated. “So I think the importance of looking at how you come over in the media is working out what is clear, what is simple, good illustrations, good examples, so that all of us understand what the questions are and what the answers are,” he added.

Chief of Applied Meteorology and Climatology at the Caribbean Institute of Meteorology and Hydrology, Adrian Trotman said the session forms part of a series of meetings to train meteorologists to speak on long term climate issues as opposed to short term weather forecasts.

“Our Meteorologists from the region are well trained in weather forecasting, however, over the last three years, there’s been a greater effort to train our region’s Met Services including CIMH in climate forecasting where we look at that three to six month time-scale,” Trotman added, noting that it’s a different skill that utilises different software to that of weather forecaster.

The workshop comes ahead of the opening session of the 2015 Dry Season – Caribbean Regional Climate Outlook Forum (CARICOF) Meeting which takes place Thursday, November 26 at the St. Kitts Marriott Resort.