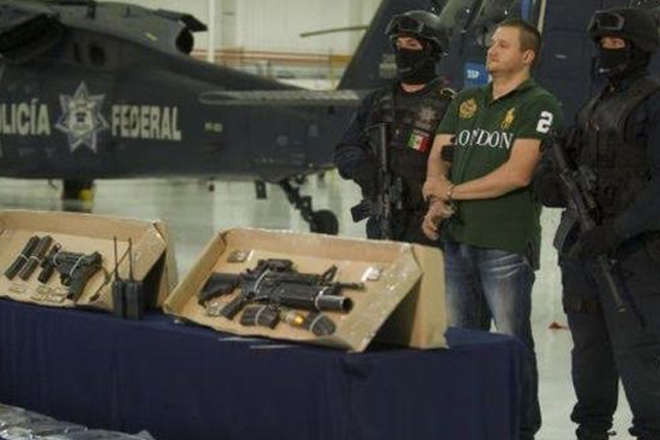 (BBC) The leader of a Mexican drug cartel, Edgar Valdez Villareal, has pleaded guilty to drugs charges in a US court.

Valdez, a US citizen better known as “Barbie” for his light eyes, was arrested in Mexico in 2010 and extradited to the US in September 2015.

A key figure in the Beltran Leyva cartel, he was accused of smuggling more than 1,000kg (2,200lb) of cocaine into the southern and eastern US.

He has yet to be sentenced but lawyers said he could face life in prison.

Valdez, a former high school football player in Texas, is believed to have started his criminal career dealing marijuana in Laredo, Texas.

He left his middle-class life in Texas in the 1990s after being indicted in the US, where he had expanded his drug-dealing business to the neighbouring states.

In Mexico, he joined the ranks of the Beltran Leyva cartel and quickly gained a reputation for extreme violence which helped him rise through its ranks quickly.

He is believed to have led the cartel’s gang of hitmen.

When the cartel’s founder, Arturo Beltran Leyva, was killed by Mexican security forces in 2009, Valdez made a move for the top job, pitting himself against Arturo’s brother Hector and unleashing a wave of internecine gang warfare,

Each group would decapitate their rival’s hitmen and hang their bodies from bridges as a grisly message to keep out of each other’s territory.

He pleaded guilty to charges of conspiring to import and distribute cocaine, and conspiring to launder money, before a federal judge on Wednesday.

While security forces say they have dismantled the Beltran Leyva cartel, Mexico continues to suffer from drug-related violence which has left tens of thousands of people dead over the past 10 years.

The most notorious cartel leader, Joaquin “Shorty” Guzman of the Sinaloa cartel, is currently at large after escaping a maximum-security jail in July last year.