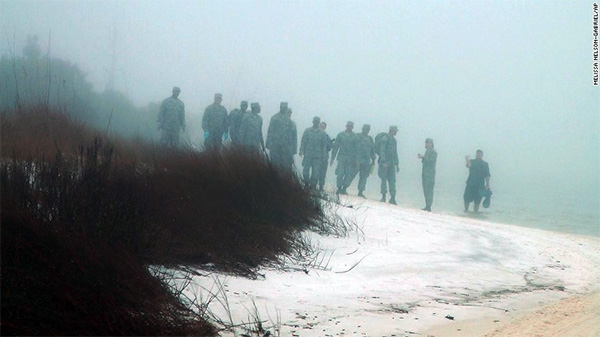 While the fog has hampered air search and rescue efforts, a Coast Guard spokeswoman said their boats will scour the waters throughout the night, weather permitting.

A dense fog advisory is in place across the region until noon CT.

The debris washed up on both the north and south sides of Santa Rosa Sound, which is between mainland northern Florida and a barrier island.

Base spokeswoman Jasmine Porterfield didn’t specify what was found, noting that the search and rescue mission remained underway. Still, there was little hope for a miracle, with Gen. Martin Dempsey, chairman of the Joint Chiefs of Staff, expressing his condolences.

He said the crash was “a reminder to us that those who serve put themselves at risk, both in training and in combat.”

“We will work with the services to ensure that … their family members will be well cared for.”

The Air Force, Coast Guard and civilian agencies participating in the intensive search are focused on where they believe the aircraft went down, in waters east of the town of Navarre and the Navarre Bridge, and near Eglin testing range site A-17.

Porterfield said approximately 100 people were involved in canvassing the ground and the waters, looking for debris: “It’s a huge effort underway.”

“We’re working closely with all the parties involved to locate our Marines and the Army crew that were on board,” added Capt. Barry Morris, a spokesman for theU.S. Marines Corps Special Operations Command. “And, really, just our thoughts (and) prayers are with the Marines, the soldiers and the families of those involved in the mishap.”

Second Black Hawk got back safely

No one is saying what caused the accident, with Eglin spokeswoman Sara Vidoni indicating only that there are no signs of anything suspicious.

There was heavy fog in the area when the aircraft went missing, though the Eglin spokeswoman said it’s too early to tell whether that had anything to do with the crash.

“There is training in all conditions — that’s part of the military mission,” Vidoni said. “They were out there doing what the military does.”

According to Morris, the service members — all men — were involved in a seven-day training exercise of amphibious operations. It involved small boats, and inserting and extracting Marines from the water via helicopter. Morris would not say which phase of the training the Marines were in Tuesday night.

The UH-60 helicopter wasn’t alone when it went down. A second Black Hawk — assigned to the 1-244th Assault Helicopter Battalion based in Hammond, Louisiana — safely returned to the base, some 40 miles east of Pensacola.

The aircraft were both assigned to the Louisiana Army National Guard out of Hammond and taking part in what the U.S. military called a “routine training mission involving the Marine Special Operations Regiment” out of Camp Lejeune, North Carolina.

“Whatever the trouble was with the one aircraft, it did not involve the second helicopter that was participating in the exercise,” said Bourland, the Eglin Air Force Base spokesman.

The Army aircrew members belonged to the Army National Guard unit out of Louisiana.

A Marine died Wednesday when a T-59 Hawk, an aircraft operated by a civilian contractor, crashed at Marine Corps Air Station Yuma, Arizona.

The aircraft hit a government vehicle, killing the Marine. The pilot and passenger of the plane were examined and released by emergency services.