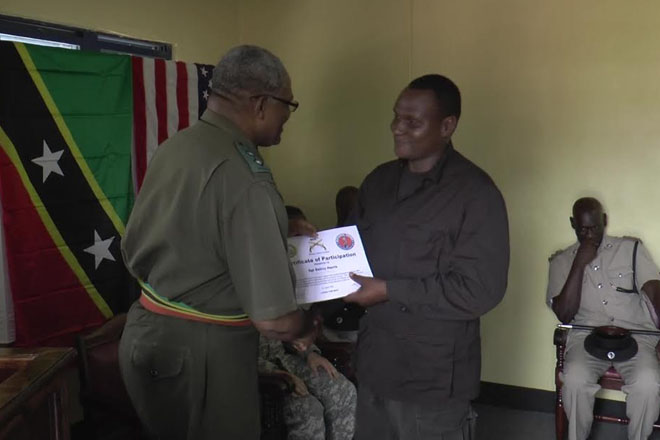 (ZIZ News) — Two weeks of military training for local security forces wrapped up on Thursday afternoon with the closing ceremony of the Subject Matter Expert Exchange.

Members of the Florida Army National Guard have been working with the St. Kitts-Nevis Defence Force, the Police Force, the Customs and Excise Department, and Her Majesty’s Prison in an information sharing exercise.

Following a simulation exercise at the Defence Force Base at Camp Springfield, the participants were presented with certificates.

Commander of the Defence Force, Lt. Colonel Patrick Wallace noted the importance of this type of exchange and thanked the Florida officers for being a part of it.

“The St. Kitts-Nevis Defence Force and the Florida Army National Guard have had a long working relationship. We have had such exchanges in the past. We’ve had the military police last year I think it was, and we’ve just concluded a Search and Rescue Subject Matter Exchange. It is always good for us to have you here and we appreciate the fact Florida sees it necessary to send you hear to impart your skills and knowledge to us,” he said.

Wallace said the exercise also strengthened the bond between the various arms of the national security forces.

“You might have known each other before but I am sure that by working together over the past ten days, that you would have developed closer relationships. And let’s hope that those bonds which have existed are made stronger and it will work for the betterment of the security in our Federation,” he said.

At the end of the ceremony, the St. Kitts-Nevis Defence Force and the Florida Army National Guard exchanged tokens of appreciation and pledged to continue working together for the improvement of both bodies.