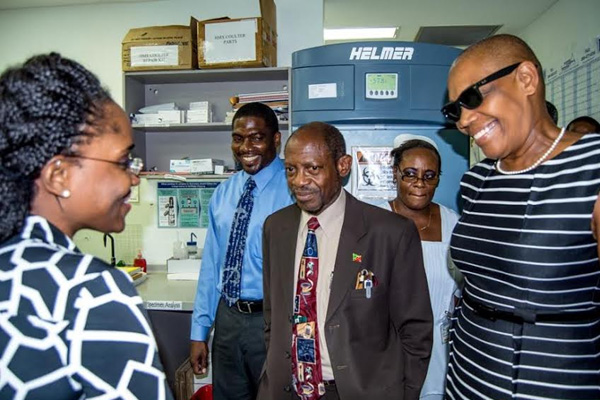 Basseterre, St. Kitts (SKNIS) — Minister responsible for Health Honourable Marcella Liburd has placed on record that she is excited about recent advancements as well as those that will take place in the near future at the Joseph N. France (JNF) General Hospital.

Minister Liburd noted this at last week’s Out and About with the Prime Minister, when St. Kitts and Nevis Prime Minister, the Right Honourable Denzil Douglas visited the Pogson Medical Centre in Sandy Point and the JNF Hospital in order to meet with and hear from administrators and staff.

Minister Liburd accompanied the Prime Minister during the JNF leg of his mission and stated that the soon to be upgrades would embrace Phase Three of the Hospital Improvement Project. This would include the renovation of the back and northern sections of the hospital along with improvements in the cafeteria, kitchens, central supply stores, pathology, construction of a new mortuary, and internet connectivity in patient rooms.

The Minister of Health made the point that most often the hospital has not done a good job of informing the public about positive aspects such as upgrades and benefits of its efficient service. The human element was also addressed.

“With all the new equipment and everything, if we are not training and upgrading our human capacity, we won’t be going anywhere,” Minister Liburd emphasized. “So I want to assure the public that this has also been done. We have been doing continuous training of our Doctors and Nurses and other support staff to keep up to date with current realities.”

Minister Liburd rejoiced in the fact that St. Kitts and Nevis was certainly ahead when it came to achieving the United Nation’s Millennium Development Goals in the healthcare sector.

“Three of the eight Millennium Development Goals are health-related. They refer to child mortality, maternal death and HIV,” Minister Liburd relayed. “I want to inform the public that on all three counts we are more than meeting the standards for the Millennium Development Goals. We have surpassed them actually, in terms of our performance. Child mortality is extremely low. Maternal deaths are almost non-existent – I think we had something like two over a five-year period. And in terms of HIV, that has kind of leveled off and all persons living with HIV and AIDS have access to the needed services.”

It was detailed that the Government pays 78 percent of the medical costs for Persons Living with HIV and AIDS (PLWHA) in the Federation. The Minister also noted that the life expectancy of Kittitians and Nevisians had risen from 73 to 75 in a matter of two to three years.