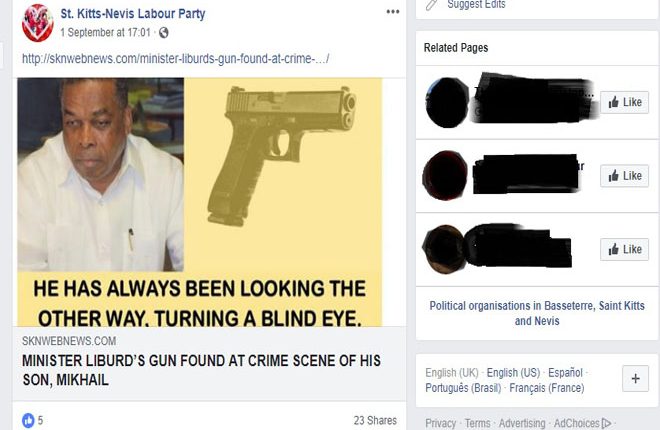 Parliamentary representative for constituency one the Honourable Ian Patches Liburd has slammed the St. Kitts and Nevis Labour Party for what he calls its attempt at character assassination in an article on its official Facebook page that seeks to link the Honorable Minister to the homicide of his son.

On September 1, the opposition posted on its Facebook page a link to a supposed news article with the headline, “Minister Liburd’s Gun Found at Crime Scene of His Son, Mikhail”.

During National Assembly, Minister Liburd denied such allegations which suggested that his gun was found at the crime scene. The Minister blasted the opposition for what he called a blatant lie.

Minister Liburd stated for the records of the Honourable House that he has never owned a firearm.

Over the past several weeks, members of the opposition have been calling for joint discussions with the government to address the crime situation in the country. But with this latest action, Minister Liburd is questioning the genuineness and sincerity of those calls.

32 year old Mikhail “Mitch” Liburd was shot and killed in Pine Gardens, Shadwell, on August 27. Police investigations into the incident are ongoing.