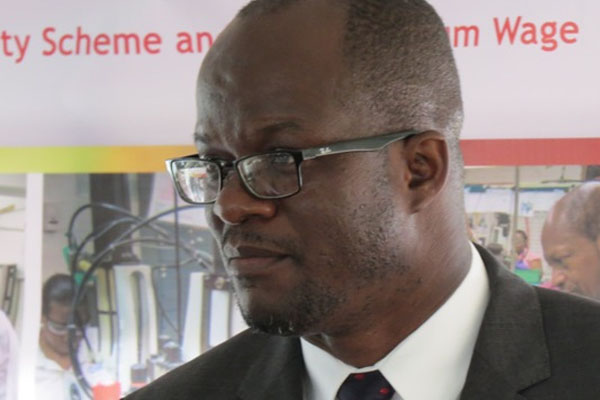 Basseterre, St. Kitts (CUOPM) — Minister of Labour, the Hon. Patrice Nisbett, has been outlining the broad policy imperatives of the Ministry of Labour which he says includes hospitality; physical infrastructure; manufacturing/industrial sectors and the construction industry.

He said when he was given several portfolios including Labour in January 2013, the task has been even more daunting when considered against the ravages of the global financial crisis, and now being exacerbated by the various conflagrations that are raging globally, and which still threatens the Global Economy.

“The World of Work is ever changing. There is no longer “lifetime” employment. Indeed the world has seen unemployment mushroomed over the past five (5) years rendering asunder the socio economic infrastructure of many a Nation,” said Minister Nisbett at the ceremony to officially launch the implementation of the New National Minimum Wage and the Long Service Gratuity Scheme on the C. A. Paul Southwell Industrial Park.

He told stakeholders including Permanent Secretaries, Heads of Department, Members of the Private Sector, the Trade Unionists and workers, that the Government is charged with the development of the country in the interest of all and has striven to ensure that social justice, decent work, educational reforms, job creation remain central to the remit and are sustained.

“That the Private Sector continues to grow and be profitable is commendable and results directly from the many concessions they receive from this Government. That local and foreign investment continues to be made manifested in the economy and circulate and multiply therein is also evident of the work we continue to do. The Government, your Board of Directors for the Country’s development, is in the business of facilitating all of the above so that we can all share in the dividends and that the Government understands economic synergies. That is why the vast array of pro-growth policies abounds,” Minister Nisbett, who is also Minister of Foreign Affairs, Homeland Security, Justice and Legal Affairs,

He outlined the broad policy imperatives of the Ministry of Labour is to grow the hospitality sector; grow the physical infrastructure, expand the manufacturing/industrial sector (through the Brazil Partial Scope Agreement and other trade related initiatives); and spur the construction industry.

“And in all this – grow our human capital educationally, the dedication and skills set that propel us to be the No 1 manufacturing status in the OECS and the destination of choice in the Caribbean,” said Minister Nisbett.

The Labour Minister praised every worker in the Industrial Estate, those in the Hospitality Sector and elsewhere in the Federation for continuing to make the foregoing possible.

“You the workers must be justifiably proud of the fact that your skills, your time, your dedication are imprinted on the manufacture of goods produced in St. Kitts and Nevis – bound for the United States, Germany and Europe,” said Mr. Nisbett.

He said he was proud to acknowledge the prowess of the local manufactures, who have a combined total of over 2,000 workers and who contribute to the gross domestic product (GDP) of 7%; but also to deliver on a commitment by the Government.

“I am proud to be here to salute the working man and women in manufacturing and the hospitality sectors – (the spine of our nation’s economy), to salute their dedication, commitment to excellence and partnership with the various enterprise – carrying aloft the vision. I am proud to say that for you the workers in the Industrial and Labour Relations sphere, the Government has your best interests at heart,” said Mr. Nisbett.

He reaffirmed that the St. Kitts-Nevis Labour Government continues to build on the industrial/labour relations polices to enhance the standard of living of the workers, the quality of work, protection of the rights of the workers and the creation of socio-economic protection programmes from which the workers can justly benefit.

“The Government through the Ministry of Labour is working assiduously and proactively to advance the reformation of the Industrial and Labour relations space through a new dispensation of delivering the Labour Administration remit of International Labour Affairs, employment division, occupational, Safety and Health, statistic Information on the Labour Market and Industrial relations as per ILO Convention 150 and Recommendation 158,” said Minister Nisbett.

He disclosed that the Ministry of Labour is forging ahead with the Draft Labour Code, enhancing the Labour Market Information System – the infrastructure and training in place and the implementation is expected shortly and implementing the National Workplace policy on HIV/AIDS and other Non-Communicable Diseases already agreed to and signed of which the pilot implementation programme will commence shortly.

“Your Government has been honing the Social contract, between, the Government, the people, the working population, the Trade Unions, NGO, Civil Society, employer and their representatives, the Chamber of Industry and Commerce so as to ensure that the national conversation on all facets of our Society continues unabated in the industrial and labour relations space,” said Minister Nisbett, who added that the Government has accordingly formalized through legislation – the National Tripartite Committee on Labour Standards.