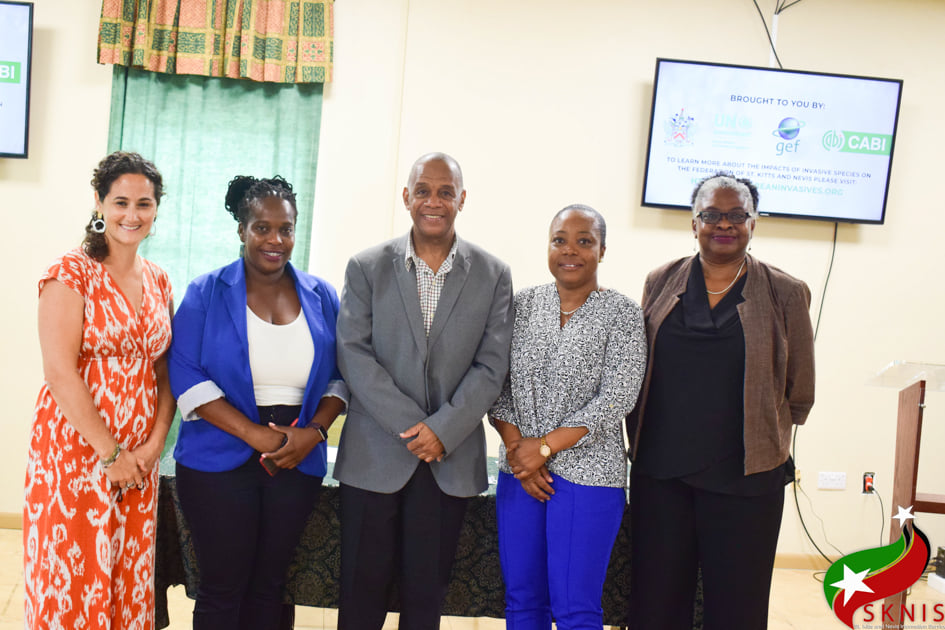 Friday 26 November marked the official start of the 8-month Communication, Education, and Public Awareness (CEPA) Campaign for the Department of Environment’s project “Preventing Costs of Invasive Alien Species (IAS) in Barbados and the OECS Countries.”

The IAS project is executed by the Centre for Agriculture and Bioscience International (CABI), implemented by the UN Environment Programme, and funded by the Global Environment Facility with co-financing from the Government of St Kitts and Nevis. The IAS project’s communications team has spent the past year developing a communication strategy aligned to the needs of the Federation of St Kitts and Nevis. Additionally, research and engagement with key stakeholders has been ongoing in collaboration with the Department of Agriculture and Dr. Kerry M. Dore, the National Coordinator for this project.

In her opening remarks at the launch, Senior Environmental Officer Ms. Cheryl Jeffers clearly defined IAS and why their control and management is so important with regards to biodiversity preservation. She noted that “these species that we describe as invasive, and alien, are exotic species that have been moved outside of their natural range by people. They then establish and proliferate to the detriment of local ecosystems, biodiversity, and human and animal health.”

Some of the priority IAS for St Kitts and Nevis were highlighted: rats (Rattus rattus and Rattus norvegicus), lionfish (Pterois volitans), wild tamarind (Leucaena leucocephala), mongoose (Herpestes javanicus), and the green monkey (Chlorocebus sabaeus). They have entered the Federation through various pathways. Some were brought in unintentionally through trade and transport, but as Minister Evelyn outlined, many problematic plants and animals often enter our borders intentionally via local persons.

In highlighting the importance of stakeholder partnership for controlling and managing the spread of IAS in St Kitts and Nevis, Minister of Environment Mr. Eric Evelyn noted that “the Ministry of Environment, in collaboration with other government departments, the private sector, NGOs, and community partners such fisherfolk and farmers, will ensure that public awareness is raised in the management and spread of IAS which threaten biodiversity and sensitive ecosystems.” Minister Evelyn also stated that “while monkeys and donkeys are for some the most obvious and problematic IAS, we must bear in mind some species like the lionfish and mongoose have become increasingly problematic to fishing livelihoods and homeowners.”

An intense communications campaign is planned which will include partnerships with educational institutions, social media ambassadors, and radio appearances and outreach with key stakeholders.