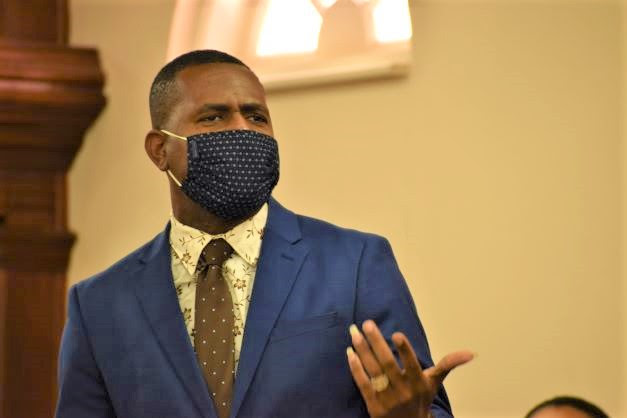 Basseterre, St. Kitts, December 24, 2021 (SKNIS): Minister of Public Infrastructure, Deputy Prime Minister the Honourable Shawn Richards says the Water Services Department has been working diligently to make a number of changes that will benefit the public.

“Mr. Speaker, we have for example in 2021, that we did major works on a tank in Conaree that was leaking for more than a year Mr. Speaker and I can now report to the public that we have undertaken the necessary repairs to that water tank,” he said during his presentation on day two of the 2022 Budget Debate in the National Assembly on December 15.

He also stated that the Water Services Department has installed a total of 557 new connections in 2021.

“This means persons have been building homes and have been making applications to the Water Services Department to get their connections of water to their homes which means that persons have confidence in the economy,” the Minister of Public Infrastructure said.

He also stated that this year the Water Services Department was able to dedicate a crew to improve revenue collection including disconnection for arrears, true auditing of water consumers, and updating of billing information.

The Minister of Public Infrastructure stated that the total arrears of the Water Services Department is approximately 20 million dollars.

He stated also that he supports the decision of the Water Services Department in making disconnections because he says that “persons must pay their share and not one set of persons carrying the burden for some persons.”

Deputy Prime Minister Richards commended the elderly for being consistent in paying their bills saying, “I see old people come to the water department almost every single day to pay their bills and if it is that persons are making an effort then you are able to work with those persons but when you see that persons are making absolutely no effort, then it becomes a totally different story.”