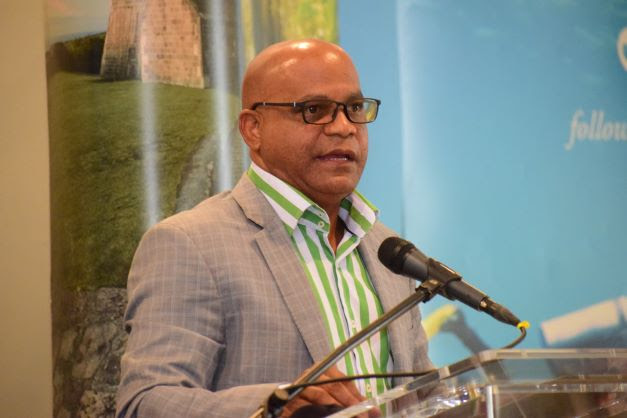 BASSETERRE, St. Kitts, November 19, 2021 (ZIZ) — On Friday morning Minister of Tourism the Hon. Lindsay Grant hosted a press conference at the Marriott Resort to update the public on the development of the tourism sector as the nation’s economy recovers from the impact of the COVID 19 pandemic.

During his presentation, Minister Grant said the future of the sector looks bright and referred to the batch of cruise ships that visited St. Kitts in the past few weeks.  He also noted that the ministry expects 58 cruise ship calls in December with almost daily calls until the end of that month and 6 cruise ships expected on the 16th of December.

Minister Grant said the influx of shops has resulted in jobs being spread around, not to just the bigger tour companies but the smaller taxi operators as well who are vaccinated and travel approved.

On the topic of taxis, Minister Grant noted that a meeting was held with the taxi operators to discuss concerns, particularly with the dispatching system.  He said their concerns were noted and will be addressed soon.

In the meantime, he encourage everyone to manage expectations as cruises are still operating at around half capacity and this would mean that it would take some time before the sector could return to pre-COVID levels of activity.