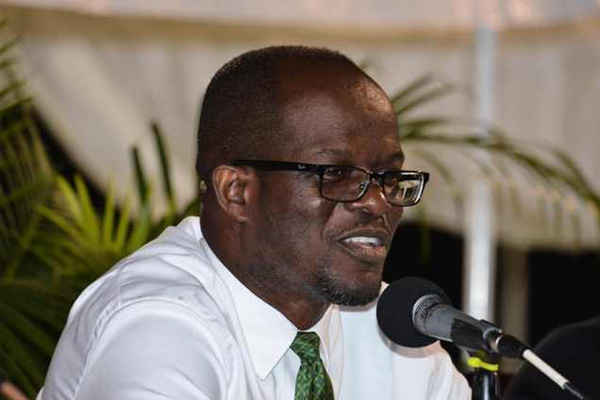 Brown Hill, Nevis (CUOPM) — The establishment of the Long Service Gratuity and the Increase in the National Minimum Wage are two of the important initiatives spearheaded by Minister of Foreign Affairs, Homeland Security, Immigration, Labour, Justice and Legal Affairs, the Hon. Patrice Nisbett designed not only to empower workers, but also improve their quality of life.

Referring to the establishment of a Long Service gratuity for certain categories of workers, Mr. Nisbett pointed out that the Government has been carried in the backs of the working men and women of the country who continue to toil tirelessly in the interests of their employees and in that of the country.

“I had no choice therefore than to heed the call of our Prime Minister and my colleagues in the Cabinet to make a reality the introduction of the long service gratuity. That was my first order of business on becoming the Minister of Labour,” said Minister Nisbett at a Federal Government-sponsored “Conversations For Progress” at the Brown Hill Basket Ball Court as he reported on his several achievements and accomplishments.

“I achieved what those before me failed to, resulting in the provision of Long Service Gratuity for employees in the hospitality and manufacturing sectors who would have served for ten or more years and elect to retire. This initiative will benefit hundreds of individuals who prior to its implementation would have left their work place with a mere letter of thanks for their committed and dedicated service,” he said.

“That is the difference between us and them, some attempt to baffle our populace with deception, while we dazzle thought the implementing of a creative mix of policies designed to transform lives. So, persons who would have worked at Four Seasons, Oualie Beach, and Hermitage Hotels now have no fear of leaving without money in their pockets,” said Minister Nisbett, who added: “That is what you elected me for, to transform your lives through service.”

He said the Denzil L. Douglas Government holds firm to the view that the people must participate in, and benefit from the fruits of their labour and in fact from the tremendous economic strides that the country continues to make.

“It is for this reason that I was charged with responsibility to pilot the increase in the minimum wage to EC$360.00 per week. I am advised that our new minimum wage is now amongst the highest in the OECS,” said Minister Nisbett.

“As if our efforts to increase the minimum wage were not enough, your government was determined to prevent erosion in the real spending power of the recipients and so enacted the appropriate amendment in the National Assembly to increase the threshold so that persons receiving the minimum wage still will not pay any social service levy. No matter where you work on Nevis or St Kitts, as long as you are paid the minimum wage, you cannot get less than $360.00 per week and you will take home all, nobody dipping in your pay,” he added.

He reminded all that all this was achieved without the support of the misleaders of the Unity Concoction who continue to masquerade before the people trying to convince them that they have the best interests of the people at heart.

“Their recent actions not to support these important policy initiatives suggest otherwise-Shame on them, you must continue to shun people who are out of touch and just desire to use you. Do not be fooled into parting ways with your government, tried and tested, for those who by their deeds, want to keep you in the mire and despair. Far too often, we heard from our people that they felt disadvantaged in situations where they were offered separation packages from their former employees and were not allowed to receive severance payments,” said Minister Nisbett.

He said the caring government, listens, deliberates and then act in the interests of all the citizens and residents.

“After careful consideration, I remind my audience that I recently piloted an amendment to the Protection of Employment Act so that such persons who would have received separation packages from their employers would still benefit from severance payments.

This is the case with more than forty Nevisians and Kittitians formerly employed by LIME. I give you the assurance to night, that you will receive your severance payments in short order,” said Minister Nisbett.