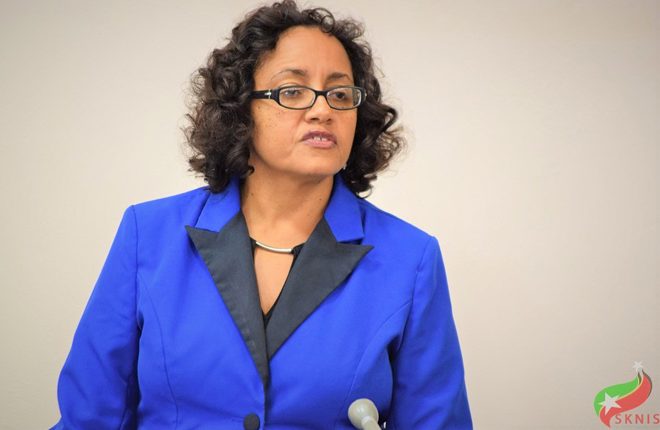 (SKNIS): Minister of State with responsibility for Health, Senator the Honourable Wendy Phipps, highlighted the development initiatives that the Ministry of Health has been undertaking since 2015 while giving an account of her portfolio at the 2018 Budget Sitting in the National Assembly on December 7.

“From our vantage point, the Ministry of Health has been on an upward part towards recovery based on the state in which we found the ministry upon taking office in 2015,” stated Senator Phipps, while noting that the ministry has made improvements in the addition of infrastructure and renovations, an increase in services in the healthcare sector, and the government’s overall focus for better health.

Senator Phipps said that the ministry has seen significant investments in infrastructure by the government in the rebuilding of the Mary Charles Hospital in Molineux, the construction of the Mental Health Day Treatment Centre and the establishment of the oncology unit at the rear of the Joseph Nathaniel France (JNF) Hospital.

“In just 22 short months, we were able to accomplish that but nevertheless the work of the transformation of the Ministry of Health continues apace,” she stated.

The minister noted that the ministry has been partnering with the private sector to assist in healthcare financing and have been able to gain the support of various private parties to increase the services in the healthcare sector.

She stated that as of October 05, a joint publicly and privately owned CT Scan machine was made accessible to the public to address some of the challenges that non-communicable diseases continues to present in the federation. She mentioned that investments were also made into an MRI (Magnetic resonance imaging) machine to assist in the delivery of healthcare and limit the need for sending patients overseas for these types of diagnostic tests.

Minister Phipps said that the government has been making progressive moves in partnership with the European Union Pilot Programme, which will seek to transform the public health sector with respect to performance, productivity and pay systems. She also stated that the ministry’s partnership with the Pan American Health Organization (PAHO) in recent years has proved to be an asset and that through this partnership, the ministry has been able to gain access to grant funding to aid in increasing its human resource capital.

She said that in keeping with the 2018 Budget theme of “Putting People First in the Pursuit of Sustainable Development”, the Ministry of Health will focus on productivity, performance and competitiveness in order to keep up with the rest of the developing world.