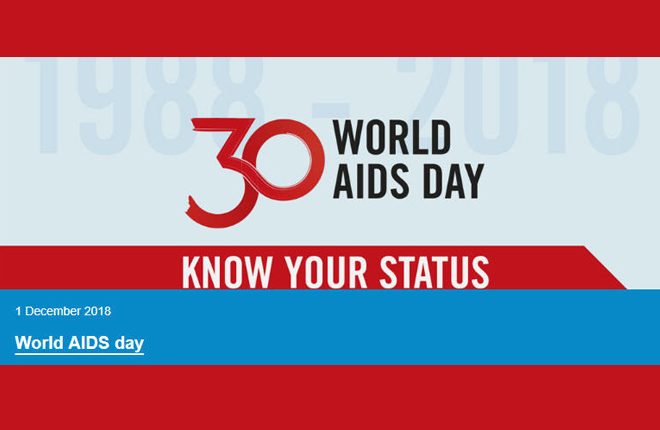 Basseterre, St. Kitts, December 03, 2018 (SKNIS): Minister of State with responsibility for Health, the Honourable Wendy Phipps said that the theme for this year’s World AIDS Day, “Know Your Status,” is a reminder to the world that the fight against HIV and AIDS begins with individuals being aware of their HIV status via testing. World AIDS Day is observed each year on December 01.

She noted that this year’s observance has significant objectives, which the ministry will design activities around in order to achieve. The objectives are to remember those persons who lost their lives to HIV; acknowledge the progress made in response to the global epidemic; and renew the United Nations’ commitment to ending the AIDS epidemic.

The Minister also added two additional significant goals, which are to break down the barriers of stigma and discrimination that prevent persons from getting an HIV test and sensitize persons to the fact that confidential testing exists.

She expressed that presently there are approximately 36.9 million persons in the world living with HIV, with only about 21.7 million receiving treatment.

“In light of these global realities, the Ministries of Health in St. Kitts and Nevis wish to stress to our people the need for each and every person to be tested for HIV, to know his or her status, and if a positive diagnosis is confirmed, that he or she be urgently linked to care, treatment and preventive services in order to stem the tide of deaths already associated with this dreaded crisis,” she stated.

Minister Phipps said that based on the current picture of the Federation’s HIV status, it stands to reason that more has to be done in order for the country to realize the World Health Organization’s (WHO’s) 90-90-90 targets and be on the track to attain the global ambition of eliminating HIV by 2030.

“It also means that we must do everything possible to educate our people about the prevention of HIV and the imperative for testing, treatment and immediate linkages to care following an HIV diagnosis. HIV/AIDS can happen to anyone, which makes it everybody’s business. HIV/AIDS affects all of us,” she said.