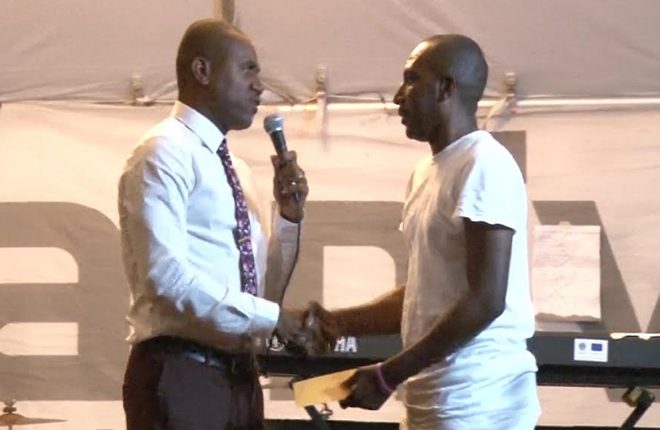 (ZIZ News) — Members of Her Majesty’s Prison, specifically those in the band, Rehabilitation Group Impression (RGI) received a donation aimed at assisting in their overall rehabilitation process.

The donation, which was in the form of a cheque, was made by the Minister of Culture the Honourable Shawn Richards during his address at the Sugar Mas 45 prizing giving ceremony on Friday.

“This year it is my pleasure to hand over a cheque in the amount of one thousand and five hundred dollars to the prisoners as appreciation for the work that they continue to do in aid of carnival in St.Kitts and Nevis.”

Minister Richards said that the inmates have been very instrumental during the Carnival season.

“I have seen quite a number of inmates from Her Majesty’s Prison being involved in the erection of these facilities and I am quite sure that you will all agree with me that they have done a fantastic job, a really good job in ensuring that we are able to enjoy carnival using the facilities that they have erected”

Rudeni Williams, an inmate who received the donation on behalf of Her Majesty’s Prison thanked Minister Richards for such an investment.

“On behalf of the Superintendent of Prison Mr. Junie Hodge we really appreciate this cheque and we reassure you that this cheque will go to help pushing the program. He is a man, since he got Superintendent up there, he been shoving it hard, shoving the musical program, the arts, the education and everything. We are very thankful to be here once again, it’s always a pleasure,” he said.

Over the years the Rehabilitation Group Impression Band has been performing for a number of events in St. Kitts and Nevis and recently benefitted from a donation of instruments from the European Union.