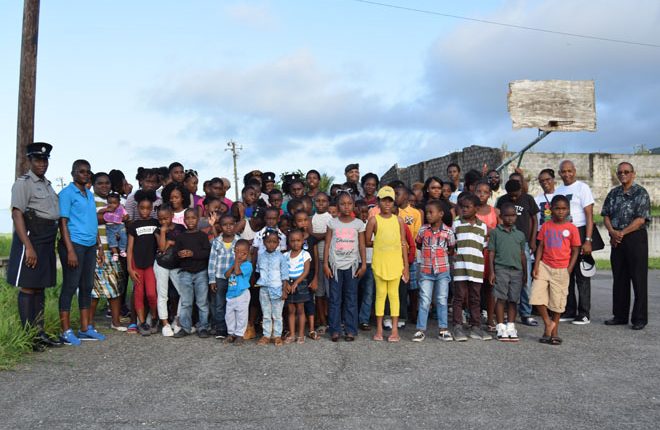 (SKNIS): The Mol-Phil Explorers Youth Club was officially launched at the Phillips Village Hard Court, on July 15, as part of the Ministry of National Security’s Crime Reduction and Prevention Strategy.

According to a recent press release from the ministry, the formation of community youth groups around the federation is also an integral part of broader community policing and social intervention initiatives.

“The youth groups will be engaged in community development, social and educational activities, all geared towards strengthening the character and promoting positive behaviours in young people, including respect, discipline and displaying positive attitudes towards all meaningful endeavours,” read the press release.

Permanent Secretary, Osmond Petty, said that it is expected that the club will be a model for other such clubs as they continue to roll-out their crime prevention strategy.

The Ministry of National Security has arranged to have the land immediately around the hard court cleaned, said Mr. Petty, adding that the initiative can become a community project. It is also hoped that the court and its surroundings can be built into a home for the club and also an area for sport and other activities such as camping.

“So we are extending an invitation to all of the people in Molineux and Phillips and the surrounding villages to join the Molineux-Phillips explorers as they expand and as their membership grows and as we begin to roll-out community activities and self-help activities to improve this facility,” said Mr. Petty.

“This will be a model club and we will keep you to a high standard so that we can say to others in the country this is what we want from our community group,” said Mr. Petty.

Dr. Neals Chitan, Crime Reduction Specialist and Motivational Speaker and guest speaker at the event said that the Phillips and Molineux community should be proud that their area is the first in the federation to have such a club.

During his presentation, Dr. Chitan spoke to the parents present stating that that they should step up and teach their children to make good decisions.

“Mommies and Daddies, don’t pretend that you are the preacher in the church, because you make mistakes too. When your children make mistakes, sit them down and say ‘Honey, I made that mistake too, but you know what, together we can fix that’. However, what we do is curse them as though you’re a saint and then what happens later your children get to find out about you and they lose respect. So, we have to break this cycle,” said Dr. Chitan.

He said that he is proud that the area has stepped-up in starting enforcement of the law at home and made a model for the federation of St. Kitts and Nevis.

Youth present at the event were charged to be examples for others. He emphasised that when they are upset that they should “Stop, Think and Proceed.”

The formation of the group commenced several weeks ago and it consists of approximately 80 members, ages 5-19 years, mainly from Molineux and Phillips Village.