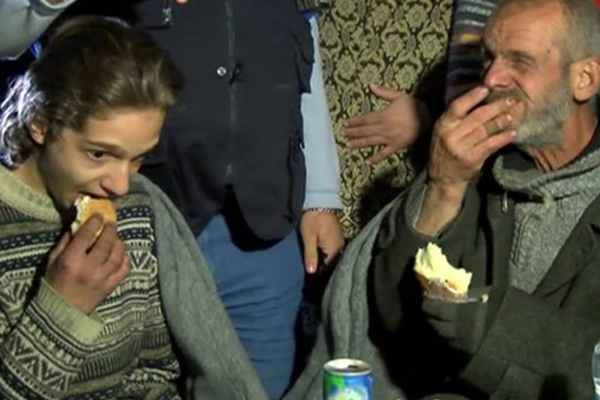 (BBC) — The Syrian government and rebels have accused each other of violating a ceasefire in the besieged city of Homs, where the UN is hoping to deliver aid.

Given the violence, it is not clear if the UN aid convoy will enter the city.

Trucks are poised to deliver food, water and medicine to some 3,000 civilians.

On Friday, the first day of what should have been a three-day ceasefire, more than 80 children, women and elderly people were evacuated from rebel-held areas.

Many of the evacuees looked frail and described extreme hardships inside the area, which has been under army siege for nearly a year-and-a-half.

They said bread had not been available for months, and many residents were gathering weeds and leaves to eat.

He said that achieving the evacuation of civilians and the delivery of food would be a “milestone” for which all parties should be commended.

Relief officials had earlier warned that this second phase of the humanitarian operation, to allow aid into the embattled quarter, was particularly delicate, not least because the government side has always been reluctant to see supplies going in to rebel-held areas.

The BBC’s Jim Muir in Beirut says it is not yet clear whether the truce breakdown is just a temporary setback, or whether it puts the whole agreement in jeopardy.

If the aid does reach the city, the next step would be another day of evacuations.

During Friday’s operation, vulnerable civilians such as children, old people and medical cases were brought out of the besieged area, sometimes carried by Red Crescent volunteers.

BBC Arabic’s Assaf Abboud in Homs says the evacuated people were given meals and drinks and were taken for medical checks.

They told journalists that there were more people trapped in the city who wanted to leave.

An amateur video filmed by activists showed one man smiling and embracing his son as they were reunited after 18 months.

Homs has been a key battleground in the uprising against President Assad.

The army launched a series of big attacks to recapture rebel areas in the Old City in the beginning of 2012, with almost daily bombardments killing thousands.

Large areas have been reduced to rubble and many neighbourhoods lie in ruins.

The situation in besieged districts of the city since June 2012 was discussed during peace talks in Geneva a week ago, but the humanitarian aid deal was actually struck between the governor of Homs and the UN resident co-ordinator in Syria.

The Syrian government is making no connection between the Homs agreement and the peace talks, but it was first mooted by the mediator there, Lakhdar Brahimi, our correspondent says.

Another round of talks is scheduled to begin on Monday and the Syrian government has confirmed it will attend.