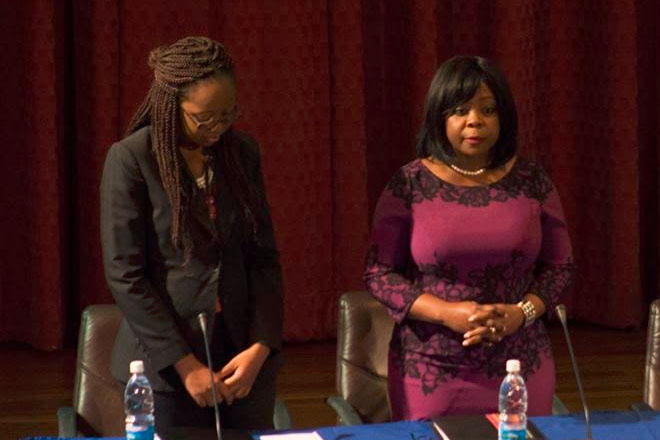 (ZIZ News) — Tuesday was a busy day for government officials as it began with the 10am National Assembly Sitting at Government Headquarters and followed with the Prime Minister’s Lecture Series at the Eastern Caribbean Central Bank [ECCB].

The Lecture, which was scheduled to commence at 7pm, was delayed due to the Assembly sitting but once it had begun, it kept attendees at ECCB and viewers and listeners to ZIZ intrigued.

Nevisian-born, Her Excellency Sherry Tross, who serves as Executive Secretary for Integral Development and Director General for Inter-American Agency at the Organization of American States (OAS), delivered the lecture.

Tross’ almost 50-minute address, highlighted the accomplishments of many nationals, offered advice on how to boost economic activity through the establishment of successful small businesses and thanked the educators and support team members who had contributed to her success.

She however, did not leave without offering general tips and reminders to nationals.

Much like Pastor Arthur Freeman, who delivered the sermon at Sunday’s Independence State Service, Tross believes that nation building is not a one person job.

“The work of nation building is never done. It requires an ongoing commitment,” she said, adding that “having an integrated policy approach which capitalises on synergies facilitates economic growth, sustainability, resilience, inclusion, and will attract key partners and investors who want to do business with us.”

She continued, “Capitalising on the wealth of human capacity that lie both within and outside of these physical borders, that is, citizens at home and in the Diaspora will exponentially expand the country’s asset base and create a deep expertise reserve from which the country can draw.”

Other tips listed by Tross were centred on inclusion.

She said, “Initiatives for inclusion, empowerment and innovation open up avenues for constructive possibility particularly for our youth,” adding that “An all out society approach in which the private sector, civil society, schools and community groups among others, feel that they are true partners is likely to contribute to greater citizen buy-in and investment in the country’s growth and stability.”

She continued, “Partnerships of consequence with other countries, institutions and entities allow the nation to benefit from lessons learnt and this helps us to accelerate development.”

The seventh summarizing tip, listed by Tross, addressed developing a sense of national identity “that rejects notions of smallness as an immediate impediment.”

Tross believes that by doing so, persons would “recognise that talent is not limited by geography” and would in turn “focus instead on capacity to act and ability to influence to help position the country to punch above its weight.”