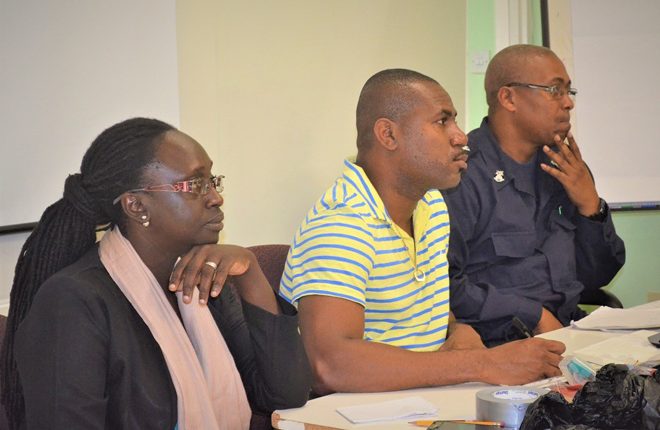 (SKNIS): Chair of the National Disaster Mitigation Council (NDMC), Deputy Prime Minister the Honourable Shawn Richards, was briefed on efforts to restore the country to a state of normalcy following its close brush with Hurricane Irma.

Where the supply of water is concerned, the Water Services Department reported that its crew has been working arduously to clear intakes and repair generators in order to ensure that water is returned to as many communities as possibly.

“As a result of their efforts, I have been informed that 95 percent of the water supply has been restored,” Deputy Prime Minister Richards said.

These areas include Basseterre through to Sandy Point, continuing into St. Paul’s through to Tabernacle. However, electricity has not yet been restored to Mansion, Phillips and Molineux and, as a result, generator-related issues are preventing the Water Department from ensuring the supply of water in those areas. Despite having difficulties with the generator for Cayon and Keys, those areas are being supplied with water, but not at full capacity, Deputy Prime Minister Richards explained.

“The St. Kitts Electricity Company Ltd (SKELEC) is reporting that an initial assessment undertaken after the passage of Hurricane Irma has revealed that a number of its electrical infrastructure has been damaged, such as fallen (utility) poles and dislodged conductors,” Deputy Prime Minister Richards said SKELEC’s crew has also been working hard.

“They began restoration by midday Wednesday and at the end of the day power had been restored to Basseterre and its environs, however, there are still individuals within this area that are still without electricity due to isolated incidents,” according to a release from SKELEC.

As at Thursday afternoon, September 7, SKELEC’s crew was doing work in the areas of St. Peters, the Nursing School to Boyd’s, New Guinea to Newton Ground, and Ottleys to Keys, with the hope of restoring power shortly.

SKELEC is also reporting that the entire rural east and rural west, which is the the northeastern part of the island, were most seriously affected. This includes areas such as Saddlers to Cayon. Minister Richards was informed that it could take several days before the entire island is restored with electricity.

Deputy Prime Minister Richards noted that the Robert L. Bradshaw International Airport reopened at midday Thursday, September 7 as scheduled and that all school as expected to reopen on Monday, September 11.

He further noted that of the six persons who were being housed in a shelter, only one remained.

He urged all members of the public to continue to be vigilant as the federation was already under a tropical storm watch as a result of Hurricane Jose, which was registered as a category two storm at the time of this update.

“Persons are asked to continue to monitor the situation and keep up to date with information from local authorities,” the deputy prime minister said. He added that all was being done to restore the country to a state of normalcy, while not letting down the guard in light of the approaching storm.