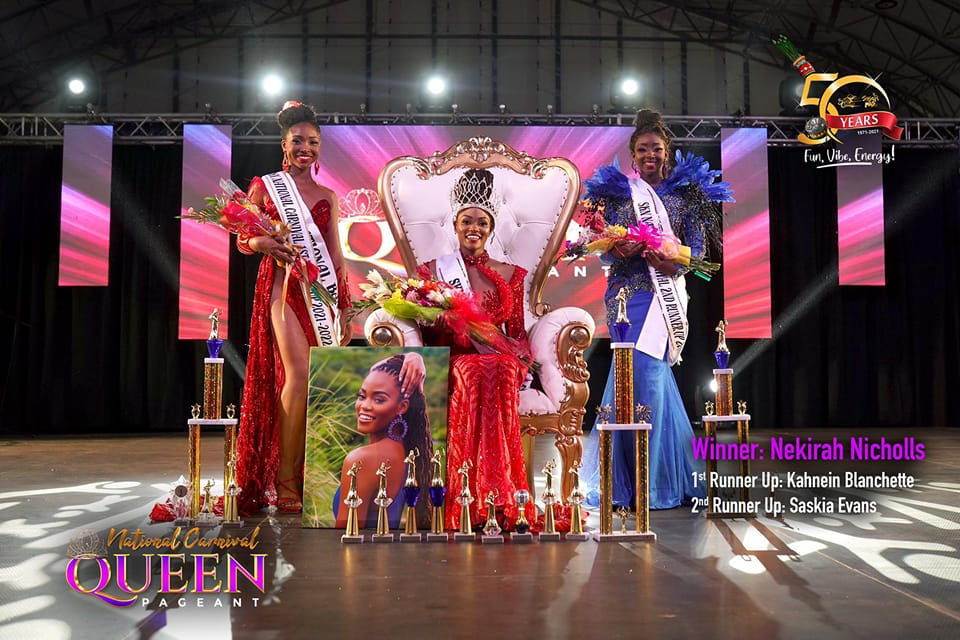 Basseterre, St. Kitts, December 30, 2021 — It was a carnival queen pageant that many have described as, “simply fantastic”.

However, it was a competition in which there were no losers, given the superb performances by each of the five delegates.

In the end, the fans leaving the St. Kitts Marriott Recreational Center in Frigate Bay did so feeling satisfied that the judges got it right when they declared 26-year-old Nekirah Nicholls as the new Miss St. Kitts & Nevis.

The decision was also warmly embraced by a cheering audience.

Nicholls, who was sponsored by National Caribbean Insurance, was impressive and consistent in her appearances and amassed 1158 points, compared to the 1089 and 928 points secured by her closest rivals.

The new queen, who holds a Master’s Degree in Finance, took home the consolation prizes for Miss Photogenic, Most Popular Contestant Online, and winner of the Runway Challenge, held on Sunday, 28th November 2021.

Nicholls was joined in the top three positions by First Runner-up, Kahnein Blanchette, sponsored by the St. Kitts-Nevis-Anguilla National Bank, and Second Runner-up, Saskia Evans, sponsored by The Cable.

Blanchette was the winner of the Best National Pride segment, with 175 points.

With her charming personality, Hasha Parmanand copped the Miss Amity as well as the Best Platform Development-The interaction of Non-nationals into local societies.

The pageant was held on Wednesday, 29th December 2021.

Here are the full results:

The next major carnival event will be the Senior Calypso Monarch Competition, on Thursday night, 30th December, at Carnival Village, starting at 8:00 p.m.