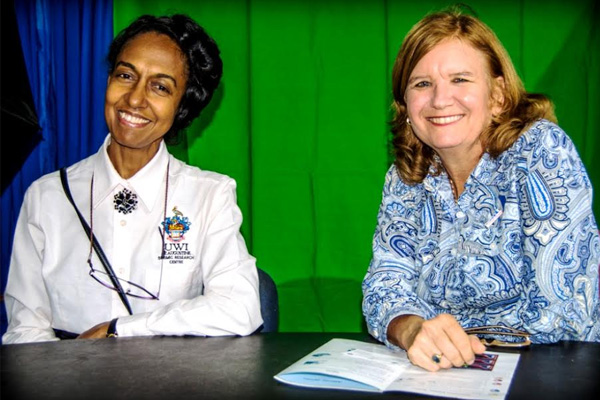 Basseterre, St. Kitts (SKNIS) — The National Emergency Management Agency (NEMA) continues to sensitize the public on natural disasters that can be devastating to St. Kitts and Nevis.

The latest initiative features a Seismic Tsunami and Earthquake Public Awareness Campaign by a group of experts from the University of the West Indies (UWI) St. Augustine Campus in Trinidad and the Caribbean Tsunami Warning Program (CTWP) in Puerto Rico.

Dr. Joan Latchman, Seismologist at the Seismic Research Centre (SRC) at UWI, expressed her desire to safeguard the public as earthquakes in the region have increased over the years.

“The area in the Leeward’s is one of the most seismically active areas in the Eastern Caribbean,” said Dr. Latchman. “Since 2011, that level has somewhat elevated.”

She stated that an earthquake occurring in Antigua or St. Maarten can affect St. Kitts and Nevis because “the energy waves are travelling through the earth’s crust and depending on the magnitude, those waves will travel longer distances.”

Dr. Latchman recently visited schools in St. Kitts to talk with teachers and most importantly, the students and also shared critical information with the public via live call in radio and TV programmes. A private session with media personnel was also held.

“We certainly noticed that the elementary school students were very receptive to the information that was presented,” she said. “Members of the general public had lots of questions about what was being discussed.”

“We should not wait for when the earthquake occurs to know what to do,” she added. “When we (everyone) are in quiet times, we should understand the hazard; have measures in place so that when it does occur, its impact can be reduced.”

“St. Kitts and Nevis have been very engaged since the CTWP was established in 2006,” she disclosed. “They have been very active participants and have installed instrumentation to monitor the events in the Federation. They also established protocols on how they would respond to natural disasters and have gone out to conduct massive campaigns to remind the community about impacts of earthquakes and tsunamis.”

She stated that the Federal Government “has taken some very important proactive steps in protecting the lives of nationals and visitors alike, as well as the economy” and urged the public to be prepared.

“In terms of tsunamis one of the things we focus on is education,” she said. “We need to educate the people. They need to be cognizant and take precautionary measures to protect their lives and property.”

Dr. Latchman stressed that the importance of individual preparedness cannot be over emphasized.

“The Government has its role to play indeed, but there are certain measures that they cannot do for the people,” she stressed. “Each household should have a hazard bag that contains essential supplies such as water, medication, first aid kit and battery operated radios or transmitters. They should be packed and ready to go.”

The duo travelled to Nevis today, where they will host a similar two day event, before returning to their respective countries.