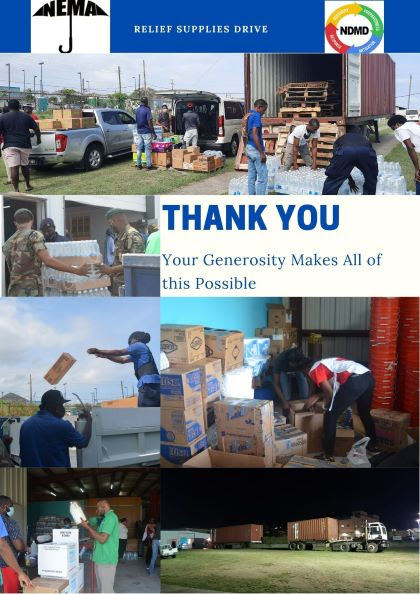 Basseterre, St. Kitts, April 14, 2021 (SKNIS): Two shipping containers of supplies from St. Kitts and Nevis left the Federation on Tuesday (April 13, 2021) to support disaster relief efforts in St. Vincent in the Grenadines, as the country grapples with continued eruptions of the La Soufrière volcano.

The volcano first erupted on Friday (April 09, 2021), forcing the evacuation of some 20,000 people from communities in the danger zone.

On Tuesday’s edition of the Leadership Matters programme, National Disaster Coordinator of the National Emergency Management Agency (NEMA), Abdias Samuel, explained that 264 contributions of food, non-perishable items, personal hygiene kits, and other supplies were donated to assist persons in St. Vincent and the Grenadines. The contributions are valued at $150,000.

The information posted on the official NEMA SKN Facebook Page noted that two shipping containers were “packed to capacity” and were shipped on Tuesday. The support is commendable given that the call for donations was made on Saturday (April 10).

Mr. Samuel indicated that the business community responded favourably to the call for donations.  Chief among them was the Rams Group of Companies that donated $40,000 worth of food and relief supplies.  He also commended O. D. Brisbane and Sons (Trading) Ltd, Tropical Shipping, and Carib Brewery (St. Kitts and Nevis) Ltd.

“Equally so, I must recognize the ordinary citizens who came to NEMA and made their contribution,” Mr. Samuel stated.

St. Kitts and Nevis Red Cross Society was also praised by the top disaster official for its outstanding volunteer support.

Residents who were unable to contribute to the initial relief drive can still donate. NEMA officials are organizing a second donation drive. Additional information can be obtained by telephone at 466-5100.