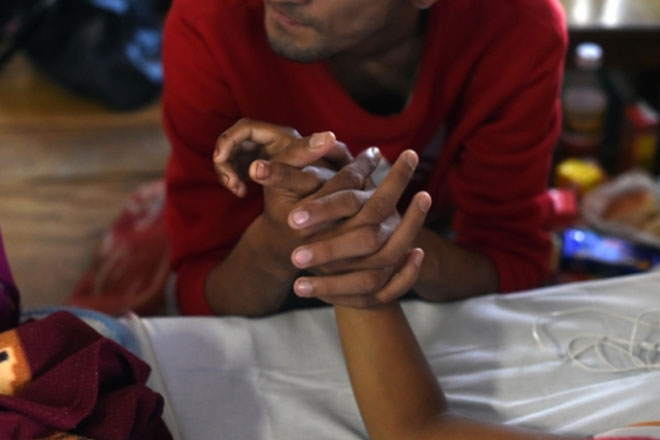 With fears rising of food and water shortages, people were also rushing to stores and petrol stations to stock up on supplies in the capital, ripped apart by Saturday’s 7.8-magnitude quake.

And fears were rising of disease outbreaks among tens of thousands of traumatised survivors who have been camping out in parks and other open spaces in Kathmandu.

“Right now, it is important to prevent another disaster by taking precautions against an outbreak of diseases among the survivors,” army spokesman Arun Neupane told reporters.

Families were packing onto buses, some even sitting on the roofs, and into cars, to leave the city for their home villages to determine the extent of the damage there.

Mothers clutching their children and men hauling bags were seen bargaining with drivers of the many buses clogging the roads out of the capital.

The exodus came as international rescue teams with sniffer dogs raced to find survivors buried in rubble, and teams equipped with heavy cutting gear and relief supplies landed at the nation’s only international airport.

Officials say more than 3,800 people are now known to have died, including 3,793 in Nepal — making it the quake-prone Himalayan nation’s deadliest disaster in more than 80 years.

More than 90 people have been killed in neighbouring India and China while a further 6,509 people were injured in Nepal.

Elisabeth Byrs, a spokeswoman for the UN’s World Food Programme, told AFP the agency would launch a “large, massive operation” with the first plane carrying rations set to arrive on Tuesday.

Thousands of Nepalis have lost their houses, forcing them to set up tents in parks, while others are too terrified to return home after several powerful aftershocks.

“This is a nightmare. Why don’t these aftershocks stop?” asked 70-year-old Sanu Ranjitkar, clutching her dog and with an oxygen mask strapped to her face as she sat under a tarpaulin.

With just plastic sheets to protect them from the elements, many were desperate for aid and information on what to do next.

“There is just too much fear and confusion,” said Bijay Sreshth, who fled to a park with his three children, wife and mother when the quake hit.

Long queues formed outside petrol stations while supermarkets were seeing a run on staples such as rice and cooking oil.

A government official said tonnes of clean water and other essential supplies were needed for survivors as well as stepped-up search and rescue efforts outside the capital.

“We also need supplies of essential goods such as food and clean water to provide relief for survivors.”