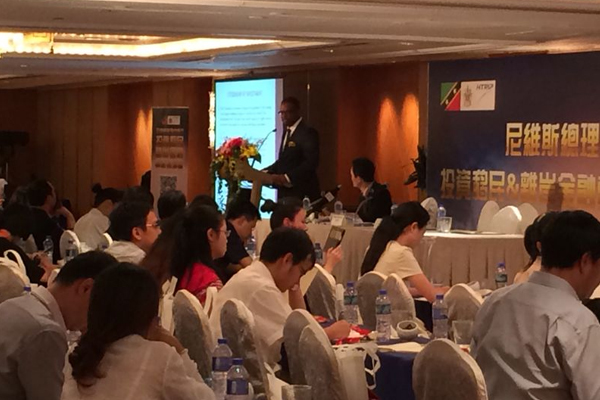 In an exclusive update from Hong Kong, given to the Department of Information on August 22, 2014, Mr. Brantley gave an account of his first of three meetings.

“I have just finished the first leg. The second and third legs will take me to Beijing and to Shanghai and so, I am hopeful that as part of this government’s continuing efforts to attract investment, that this trip will yield some results… I was very privileged to have met with just about 200 Chinese investors and to have been afforded the opportunity to update them about investment opportunities on Nevis.

“We focussed on Financial Services and the Citizenship by Investment Programme but I was also was able to update them in terms of opportunities for infrastructural development, such as the airport expansion and roads and also, of course, possibilities in the tourism sector, hotel development, villa development, real estate generally,” he said, adding that many present had expressed their interest to visit Nevis as tourists.

Deputy Premier Brantley noted that his visit to Hong Kong was facilitated by some Chinese investors who had extended an invitation.

“[My visit was] facilitated by some Chinese investors who are very keen to attract investors from Asia to the island of Nevis. It is a manifestation of the efforts being made by your government, to continue the promotion and development of Nevis as an attractive destination for foreign investment and the inward movement of investment from countries in Asia, which as we know, form a hub of a very large investment vehicle, that has been attractive and continues to attract attention from the international marketplace,” he said.

However, Mr. Brantley stated that the media was also in attendance at the first meeting and was hopeful that the reason for his trip would receive some exposure in Hong Kong’s newspapers.