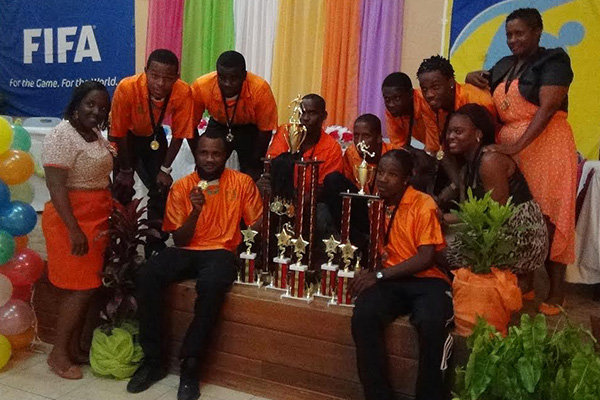 It was ceremony fit for hard working players and officials but there was one major disappointment.  The folks who were especially invited did not show up in their numbers.

Unlike the well known parable in the bible, the Nevis Football Association did not proceed to invite those in the highways and hedges but proceeded nonetheless.

It was the first annual awards ceremony hosted by the Nevis Football Association and was held at the Jessups Community Center on the evening of Saturday 22nd March.

Leander Cornelius had ensured that the hall was colourfully decorated for the occasion but only the SL Horsfords Highlights team, saw it fit to show up as true champions would, dressed in their uniforms.  The other teams and clubs were sparingly represented.

However, the ceremony itself was wonderfully coordinated by the two hostesses, Mrs. Allison ‘ALI’ Jordan- Guilbert and Mrs. Adella Meade, thereafter referred to as the ‘double A’s’.

They ensured that the program was run smoothly in their uniquely entertaining manner.

Among those addressing the gathering were: President of the Nevis Football Association, George BRIGO Meade; Raymond RAYBO Smith of the SKNFA and Mr. Keith Glasgow, Permanent Secretary within the Ministry of Sports.

Special awards were delivered to the following individuals:

Martin’s award was collected by his niece while the two other gentlemen collected theirs in person after their impressive profiles were read.

Also present at the ceremony and assisting with the presentation of awards were: Hon. Alexia Jeffers; Ms D. Michelle Liburd Asst Permanent Secretary in the Ministry of Sports and Director of the Youth Division, Ms Zahnela Claxton.

The vote of thanks were ably delivered by PRO of the Association, Delroy RAS IROY Pinney.