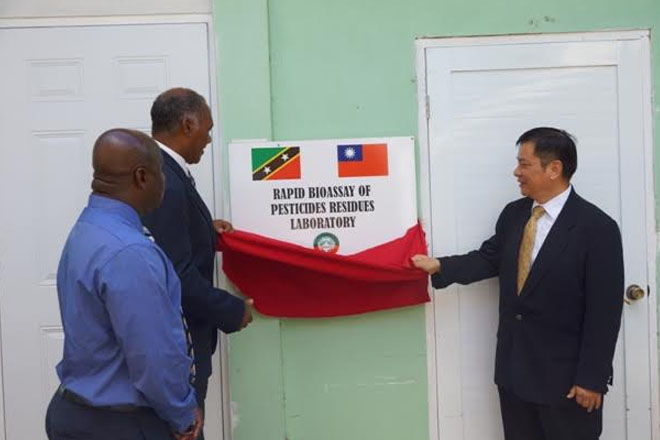 (ZIZ News) — The Nevis Island Administration (NIA) and the Republic of China on Taiwan have partnered yet again to boost agriculture on the sister island.

On Wednesday, NIA officials including Premier Hon. Vance Amory, representatives of the ROC [Taiwan], staff of the Department of Agriculture and other stakeholders gathered at the Agriculture Experimental Station at Prospect Estate for the opening of the Rapid Bioassay of Pesticide Residue [RBPR] Laboratory.

“We must move with technology and the consumers as well as our persons who are marketing these products, vegetables and fruits, persons have become more critical in what they eat and of course, persons want to be healthy and persons do not wish to consume fruits and vegetables that are still laden with pesticide residue,” Evelyn explained.

Resident Taiwanese Ambassador, His Excellency George Gow Wei Chiou also addressed the gathering. He explained the need for the laboratory, noting that it is the first of its kind in the Caribbean.

According to him, “the aim of this project is not only to increase the agro production but also to improve the quality of the produce.”

“The Rapid Bioassay of Pesticide Residue Laboratory, which we come together to witness its opening this morning, will be used for a test of the local agricultural produce,” he added.

Ambassador Chiou said the laboratory will provide information to farmers and consumers to help them establish a mutual thrust on food safety.