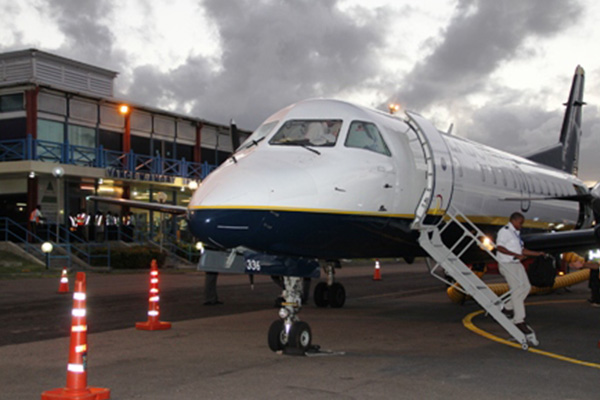 ZIZ News — Nevis’ opposition party, the Nevis Reformation Party [NRP] maintains that the daily Seaborne Airlines flight from Nevis to Puerto Rico with a stop in St. Kitts is an unnecessary expense.

According to Opposition Senator, the Hon. Carlisle Powell, the Nevis Island Administration engaged Seaborne Airlines in an agreement knowing it would not be able to fill the required number of seats.

During last week’s sitting of the Nevis Island Assembly, Powell shared a recent incident which saw only one person on board the Seaborne Airlines flight from Nevis.

“Flight number 4513 left Nevis at 7:50am with one passenger and three crew and picked up in St. Kitts 33 people who slept at the four seasons in Nevis. Why didn’t they take the plane out of nevis? The same plane. The crew slept down there with them. The seats are paid for. I understand that we have to make sure there is something there if we don’t have our numbers. We have to pay for the seats, the empty seats. They went to St. Kitts to make up the St. Kitts percentage on the plane and in Nevis the plane left up here with one person so we had to pay,” Powell explained.

The Hon. Mark Brantley is Nevis’ Tourism Minister. He responded to Powell’s claim by stating that Seaborne had experienced glitches in its system.

He said, “In relation to the various statements that have been made, let me just go on record in this house to say that I have, in the coming week, a meeting with the chairman of Seaborne because Seaborne itself has had some glitches in terms of computer connectivity. I don’t know what the right language is but to go on some of the sites and find Seaborne into Nevis, there have been some difficulties and we are sitting down with them because I would wish to say publicly that our position is any guarantees to be paid to Seaborne under the flight guarantee arrangement would have to take into account the fact that the glitches they might have had may have affected the level of traffic.”