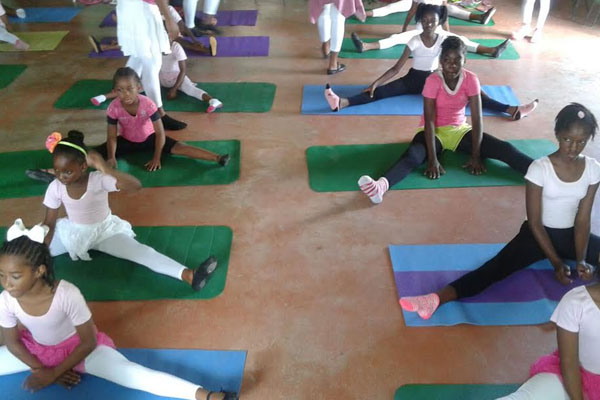 Charlestown, Nevis — Members of the Shekhinah Dance Theatre have been entertaining Nevisians since April 2008 when the group was formed, while its youthful members are kept positively occupied in an era where taming excessive youth energy has been known to be a challenge.

President of the group, Mrs Tamicia Lestrade, says that its recent association with the People Employment Programme (PEP) in Nevis through Women in Small Enterprise (WISE) which has afforded them a financial grant has made some positive changes to members of the group and has left them energised.

“The Shekhinah Dance Theatre was launched on April 12 of 2008 under the leadership of Mrs Diana Pemberton, and myself,” said Mrs Lestrade. “We have touched the lives of many young women, and males as well, on the island of Nevis.

“Currently we have about 60 on roll. At one point we would have had 100 students on roll, but members go on to college and some even got married, have children and so the numbers have been fluctuating through the years.”

According to Mrs Lestrade, when they learnt of the Women in Small Enterprise (WISE) a component of the People Employment Programme (PEP), which had been giving grants to women in small businesses, they approached the Nevis office for a grant as they needed extra funds to prop up the Shekhinah Dance Theatre.

“We approached WISE for a grant and that grant was to buy a ballet bar, and also some exercise mats,” explained Mrs Lestrade. “We wanted to get some mirrors as well, but it wasn’t enough, so we got some mats and we got one small bar, as we had to do with what the grant was able to do.”

A WISE grant is made up of two equal segments of which one half is a grant that does not need to be repaid, while the second half is an interest free loan that is repaid within a period of twelve months.

With the grant from WISE, which was given in September last year at a function that was presided over by the Federal Minister of Foreign Affairs, Homeland Security, Labour, Justice and Legal Affairs, the Hon Patrice Nisbett, they were able to buy exercise mats.

Accordingly, Mrs Lestrade says that the girls now exercise on the mats, and that they do not have to lie directly on the floor that used to be the case before, and the fact that the mats also provide a cushioning for the knees if members have to do anything kneeling down

“We are very grateful and I thank God for SIDF, PEP and WISE for these initiatives because they are benefiting a lot of people, – a lot of lives more than they may even know,” concluded Mrs Lestrade.

According to PEP’s Coordinator for Nevis, Ms Kerlyn Jones, over 100 women in Nevis have so far benefitted from the WISE programme. She pointed out that the business women have come from every different background that one could think of.

“Their businesses are very diverse and many have reported that the monies that they have received from the WISE programme has helped them tremendously in upgrading the service that they are offering to the people of Nevis,” explained Ms Jones.

Those who got the grants have been repaying their loan part of it, and added that some like the Shekhinah Dance Theatre have paid off the money that they have owed with some even paying it in one lump sum, while others are repaying on a monthly basis as stipulated.

PEP in Nevis is hoping to give out more WISE grants, and according to Ms Jones, they are receiving upward of 15 applications every week, and currently the number stands at about 150 applications that they are still processing.

“We still want to give funds to them,” explained the Nevis PEP Coordinator. “We want to help as many women as we can to further their businesses and boost the economy of Nevis at the same time.”

WISE seeks to empower prospective and existing women in small enterprises through the provision of micro-finance grant support of up to $5,000 for enterprise development and through training micro-enterprise management. Of the amounts provided, an entrepreneur is expected to pay back only half of the amount, interest free.

The programme aims to facilitate the provision of employment opportunities for participants and enable women to contribute to productive socio-economic development. Participants must be nationals of St. Kitts and Nevis, be at least 16 years of age, have an existing small enterprise, and participate in a micro-enterprise training programme.