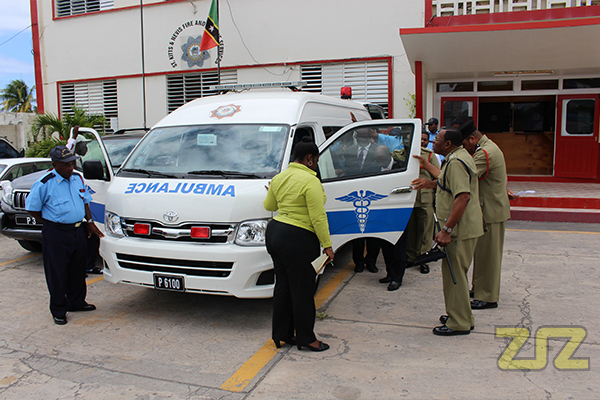 New Ambulance handed over to Fire and Rescue Services

ZIZ News — The St. Kitts-Nevis Fire and Rescue Services Department is now in possession of a brand new state of the art, fully-equipped ambulance.

An official ceremony, facilitating the handing over of the ambulance to the St. Kitts-Nevis Fire and Rescue Services Department, took place on Tuesday at the Basseterre Fire Station.

In his capacity as Minister responsible for Fire Services, Hon. Patrice Nisbett said his Ministry is grateful for the ambulance, especially at a time when the roles of firemen are evolving.

He said, “The Ministry is extremely thankful to the donors for this wonderful gift, a gift that is being received at the most opportune and appropriate time. It is important to note that the roles and responsibilities of fire officers have somewhat evolved. Firemen are now expected to respond to an effect operations, a number of these operations required the rendering of emergency medical care.”

Prime Minister, the Right Honourable Dr. Denzil Douglas shared his belief that the ambulance will be put to good use by the Basseterre fire fighters.

“The handing over ceremony of this very impressively-built and outfitted Fire and Rescue Services Ambulance is part and parcel of the continuing efforts of the government to improve the reliability and the capability of the services that are being pursued from here. There is no doubt in my own mind that this ambulance will be put to good use,” he added.

The state of the art ambulance was donated to the federation by Hadi al Khatib of the United Arab Emirates.