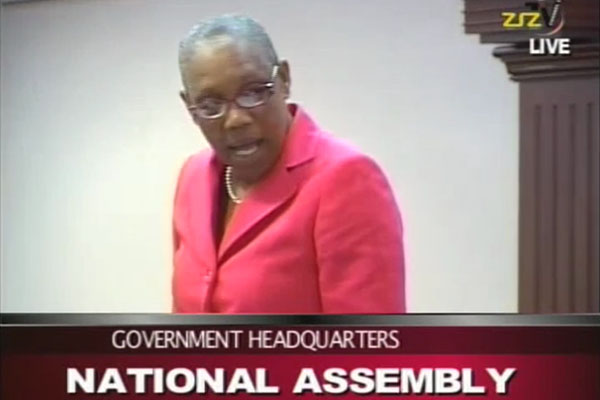 (ZIZ News) — A new bill focusing on domestic violence is expected to provide greater protection and benefits for the victims.

She said it’s part of government’s overall efforts to combat domestic violence in the Federation and the Ministry of Social Development is taking a more proactive approach.

Minister Liburd said economic dependence is one of the main factors that keep women in abusive relationships so the government has launched programmes to foster economic independence.

“We have implemented programmes such as the W.I.S.E, (Women in Small Enterprises) workshops preparing women for job interviews and also workshops to help with the running of their businesses. Many of our small businessmen Mr Speaker have been able to access the SAFE programme. All in an effort to make them economically independent,” she said.

She said the bill introduces new forms of compensation that a victim can receive, such as Emergency Monetary Relief.

“This means compensation for monetary losses suffered by an applicant or any child at the time of the issuing of an interim protective order as a result of domestic violence including loss of earnings, medical and dental expenses, moving, relocation, and accommodation expenses, or household necessities and other interim expenses. So this is something new. So for example, you’ve gone for relief and you have to be relocated, this is saying that a court can say that the respondent will have to pay the relocation costs,” she said.

Liburd said the bill shows no gender bias and makes provision for men as well, much like a recent amendment that helps men who have custody of their children.

“And as I stated at another time the law has been revised with respect to maintenance so that men can now apply for maintenance in cases where they have custody and control of their children and so I want to repeat that this bill has no gender bias,” she said.

According to Minister Liburd, from January to August there were 106 reported cases of abuse, 87 of which were physical.