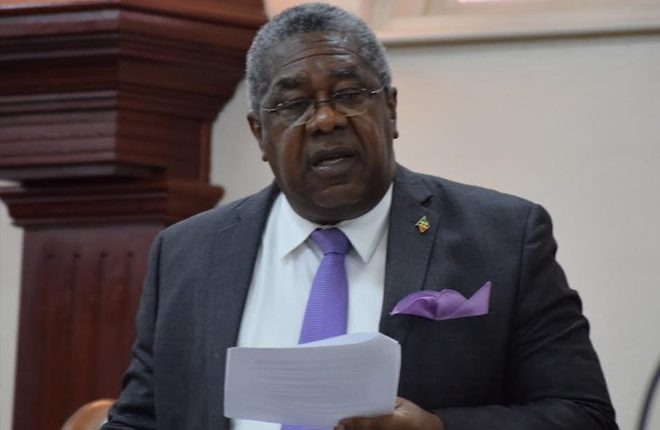 New High Court expected to open as early as January 2017

(SKNIS): St. Kitts and Nevis will have a second High Court Chamber to accommodate a second resident judge in order to deal with the backlog of cases as early as January 2017, said the Attorney General, the Honourable Vincent Byron Jr., during the sitting of Parliament for the recently concluded 2017 Budget.

The Attorney General said that the idea of having a second court has been in the pipeline over the past year when discussions were had with Dame Janice Pereira, Chief Justice and President of the Court of Appeal of the Eastern Caribbean States.

“Our second High Court Chamber is near completion and we would expect that come January morning we would now have two High Courts working in tandem here in St. Kitts at the Sir Lee Llewellyn Moore Judicial Complex,” he said. “The second court has been needed, we believe, because there has been a backlog of cases here in our court system – not just in the civil side but more so in our criminal caseload. And so we expect to have appointed shortly a second Resident Judge for St. Kitts and for the first time in our history in St. Kitts and Nevis we will now have three judges in both St. Kitts and Nevis.”

“We expect that this would lead to more efficient delivery of justice in the administration of justice,” he said. “We expect that this will mean that the very difficult task that the circuit judge in St. Kitts would have had where during the assizes, three times a year in January, May and September assizes, that that judge would sit from Monday to Thursday on criminal cases and then on Friday would have the onerous task of doing as many as 26 chamber matters in the civil side. It was very difficult and has been very difficult for a long time”

The Attorney General stated that creating a second court would mean that matters brought to the court and citizens who need access to justice will not have to wait a year or more to have their cases heard and tried.

“And so, the Team Unity Government, in less than two years has been able to source to build a second High Court Chamber,” said Attorney General Byron. “It is a major achievement for our administration and what we feel will work to assist in the administration of justice and helping us to deal with the current backlog of cases in St. Kitts.

He said that a number of significant changes were made to accommodate the second High Court Chamber. One of the changes included the relocation of the Chamber that once housed the Director of Public Prosecutions and the Crown Prosecution Services to the Georgian House, formerly the Clico Building.