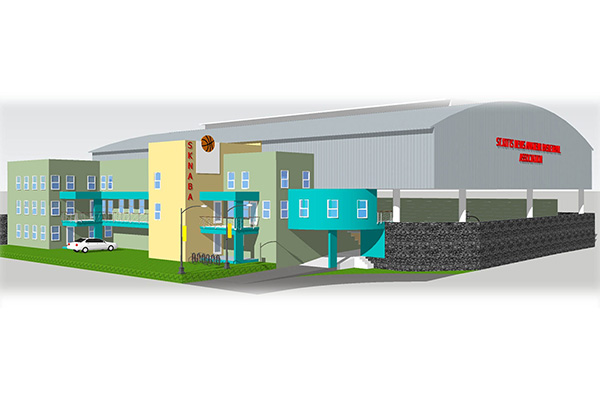 Basseterre, St. Kitts (MiyVue.com) – A major infrastructural project that is currently being pursued by one of the leading sporting associations on the island is being viewed as a catalyst that could not only revive the sport locally, but also transform the game at the sub-regional level.

The St. Kitts Nevis Amateur Basketball Association, SKNABA, says it has taken the bold decision to launch a program of re-development of what is now called Basketball City, located at the top of Victoria Road in Basseterre.

General Secretary of the body, Wallis Wilkin, says the upgrade of the new facility, as they envision it, would be a tremendous benefit to basketball. “The consensus of the executive and general membership of the association is that the development would certainly be the biggest upgrade of the sport since the introduction of the game to the island.” This is so, said Wilkin, because it has long been felt that the lack of a covered or indoor facility has been a huge hindrance to the potential of basketball in St. Kitts, as well as the growth prospective of the game in the Leeward Islands.

The basketball official explained that over the years many of their league games have been severely affected by rain, given that there presently is no cover for the court of play and the game is not one that could continue in inclement weather. “The weather issues that we have yearly, and which have gotten worse over the years, have hampered what we want to do and what we can do, in terms of moving the sport forward. We feel that with a covered facility, it would benefit the sport tremendously.”

For Wilkin and the association, a new and modern venue would serve as an impetus also to help re-activate the once popular Leeward Islands tournaments that were well supported by fans in the 1980s and 1990s, featuring competitive battles between national teams from Antigua, British Virgin Islands, St. Maarten, Montserrat, St. Kitts, Anguilla and others.

“This is an important aspect of what I referred to earlier about the potential of a roof facility. For the last ten years or so we have not had a sub-regional tournament (mainly OECS, Leeward Islands), and SKNABA has been pursuing the possibility of reviving that tournament, but partly the obstacle has been the lack of a roof facility and the inability to manage the weather patterns of the region. But with such a new facility we would be in a better position to revive these events because their absence has created a huge void, explained the General Secretary.

Wilkin said that the SKNABA is optimistic that their plans could work and that the new approach to funding should also make the project more feasible. In the past, the approach has been to leave the development of the facility to the government but this time around the association itself wants to partner with the government to help fund the project.

They have already presented, not only a design for the facility but also a plan for how they intend to pursue sponsorship and funding for the proposed new home for basketball.

The plans for the project were recently presented to the general body of the association by President Kenroy Tobias. Tobias outlined said, “We are in the beginning stages. We are basically trying to put all the estimates in place and have the floor plan presented to the Minister, and then we will try to move forward with phase one and have it ongoing and complete the entire construction by the start of the new season in 2015.”

The first Phase will begin shortly and will include the upgrade of the Northern stands to include dressing rooms, offices and bathroom facilities. This phase is expected to be completed by April of this year. The 2nd phase will include the construction of a ROOF to cover Basketball City. This phase is scheduled to start immediately at the close of the 2014 season and along with Phase 3 and 4 which will include the upgrade of the southern stands and construction of office spaces for the Ministry of Social Development, which is currently housed adjacent to the Basketball City grounds, will be completed by the beginning of the 2015 season.