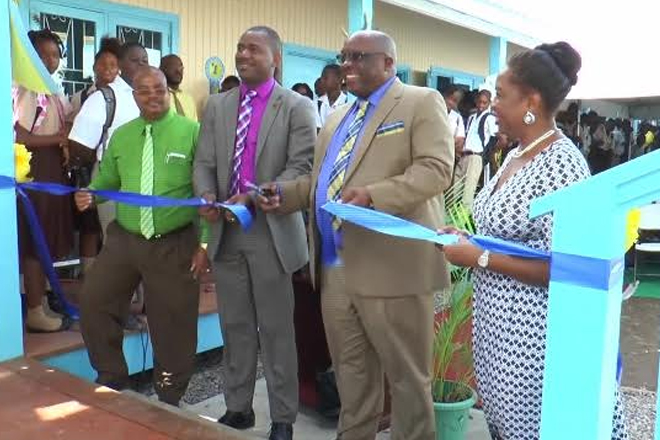 (ZIZ News) – Monday signalled a new start for the Basseterre High School as the new temporary site was officially opened.

Government officials, teachers, and students were among those in attendance on Monday morning at a special opening ceremony for the temporary site.

Over the past three and a half months, Barbados firm Innotech has been overseeing the construction of the 24 classrooms and other amenities.

President of the B.H.S. Parent Teachers Association, Walwyn Chiverton said this couldn’t have happened without the contribution of various partners, particularly the government.

“Their ministers have provided encouragement throughout the process, for which I am very grateful,” he said.

He described the support as “a visible demonstration of the government’s commitment to public initiatives in the Basseterre High School and a testament to their openness and flexibility.”

The construction project cost about five million dollars, and according to Prime Minister, Dr. The Hon. Timothy Harris it is a worthwhile investment.

“We saw it, not as a charge against the public finances but as an investment in the future of St. Kitts and Nevis. We invested because we care for the students. We care for the teachers. We care for all those involved in giving support to the purveying of a quality education,” he said.

Minister of Education, the Hon. Shawn Richards reiterated that the new structure is a temporary site and the government has already taken steps to start building a new permanent location for the Basseterre High School.

He said “A Basseterre High School Site Selection Committee, comprising of various stakeholders from different ministries, has been established,” adding that the committee has identified five possible locations and “the various key factors have been assessed to ensure that the site would bring the most benefits to key stakeholders connected with the Basseterre High School.”

According to Richards, the government has budgeted ten million dollars for a new Basseterre High School.

In the meantime, the temporary site at Taylor’s will accommodate students from first to fourth form.

The fifth form students will continue to use the facilities at Premier Dental.