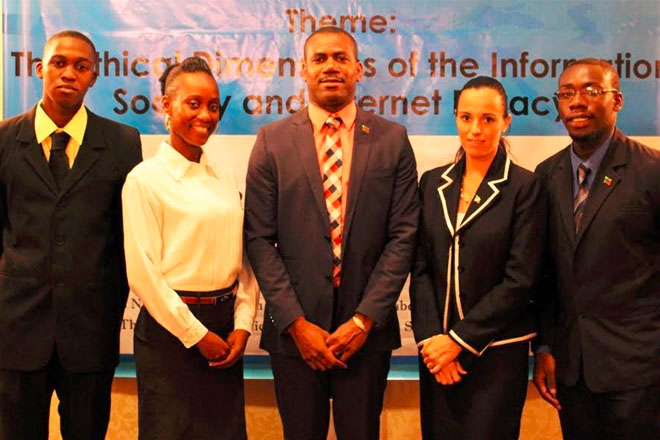 Basseterre, St. Kitts (SKNIS) — Youth-related issues will be advanced in St. Kitts and Nevis and on the wider regional level by a new group of individuals who is reportedly dedicated to uplifting their peers.

Dennis McCall Jr. and Joy Napier have been appointed as the new Caribbean Community (CARICOM) Youth Ambassadors (CYA). They now assume responsibility for advocating CARICOM matters locally, while promoting the perspectives of young people at the CARICOM level. They will be supported by Trevis Belle and Mervil Nisbett who will serve as alternates. Mr. McCall will also serve as the Dean of the CYA Corps assuming the post from Haiti’s Ambassador.

The quartet was chosen after an extensive call for persons to apply across the federation. The ambassadors began their official duties earlier this month (September) during the Independence 32 celebrations. Ambassador Napier hosted the September 17th Youth Panel Discussion entitled “Independence Perspective ‘Quo Vadis’ [2015 Onward]. The team also took part in the discussion at the UNESCO-OECS conference on the “Ethical Dimensions of the Information Society and Internet Privacy” held last week at the St. Kitts Marriott Resort. They highlighted the thoughts, concerns and positions of youth from every socio-economic background.

Their representation continues on Wednesday (September 30th) when St. Kitts and Nevis joins other countries to celebrate Caribbean Youth Day. The group created a video which chronicles the views of youth across the twin-island country on a number of matters. The video will be played at the September 30th to October 2nd Caribbean Youth Development Conference in Jamaica, which is being attended by the Minister of Youth, Honourable Shawn Richards, along with CYA alternate Belle.

Visiting secondary schools and hosting various dialogues for peers are among future events already being planned.

The Department of Youth Empowerment invites all to become acquainted with the CARICOM Youth Ambassadors, and officials are looking forward to working with them during their tenure, Senior Youth Officer Chereca Weaver said, while encouraging persons to lend their support to the various initiatives they undertake.