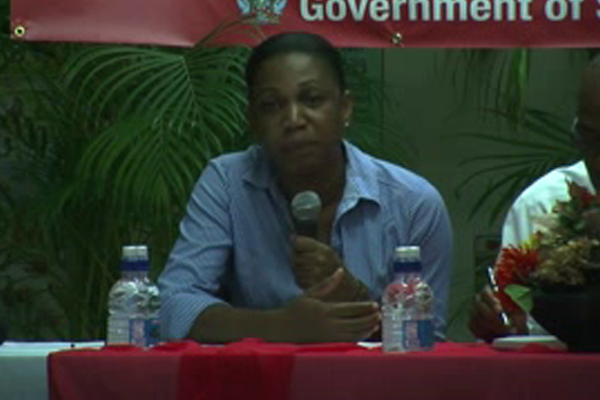 (ZIZ)– Chief Executive Officer of the National Housing Corporation (NHC), Judith Rawlins, is working hard to raise awareness of how the corporation is improving upon its programmes and services in order to better serve the public

“Our latest programmes, those that are current, include ‘Housing Solution 500’ which started in 2008 which was a mandate to build 500 homes,” she said. “We’re on the last leg. We have some forty-something homes to finish in that programme. Beyond that, we have now launched since January 2014 the new ‘Habitat Independence Thirty’, which is a programme which started as 500 homes but has been upgraded to build 1000 homes. Within NHC there are other small programmes that you should be aware of. For instance, the HELP programme, which is the House Enhancement Loan Programme, which is designed to help persons find an opportunity to add a bathroom or a kitchen to their homes. And those are the three programmes that are very active at NHC.”

The NHC head went on to explain the improvements which have been made to the design of the two bedroom homes offered under the new Habitat Independence Thirty Initiative.

“Now there have been some improvements on this house within the last two to three years,” she said. “You would’ve noticed before the terrace that was just three or four feet in front has now come five feet in the front. Before, some houses had no laundry facilities but now we’ve created a space for you where you can put your laundry tub and your washing machine by providing the laundry box and the plumbing that would give you access to the facility. There’s also a ceiling storage space in the corridor between the two bedrooms that allows you a space in the ceiling to store stuff. We’ve also done quite a bit of work on our contractor selection. We’ve heard the cry of people who have complained about what’s going on in terms of sub-standard work and we have worked diligently on making sure that our contractors understand that we are working towards a standard.”

Ms. Rawlins also noted that the NHC is listening to their clients’ suggestions. Some of these have resulted in the NHC offering more flexibility with respect to allowing buyers to customize their house.

“There are also some things coming on stream that people have been asking about.,” she said. “We are not at a stage where we can actually make these things homogenous throughout the housing but people who can afford it, if you can actually put in some money, a $3000, a $5000, you have the option of getting these upgrades. And they include galvanized roof sheeting, they include alternative windows, if you want to make one bedroom bigger, and things like that. You come to the table, you speak to us and once you can provide some upfront funding you can get a bigger house”

The new Habitat Independence Thirty Homes are sold for $125,000ec with payments as low as $671 monthly based on a thirty year mortgage.

In 2009 the houses offered in the original NHC Housing Initiative were 650 square feet. The space offered is one of the areas that have been improved upon with 759-square-foot homes now being offered under the new Habitat Independence Thirty Initiative.