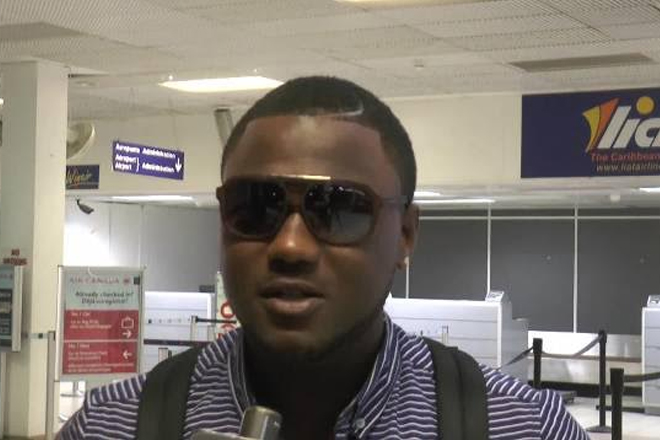 Nicha B. says he “Can’t Wait” to perform in Trinidad

(ZIZ News) — St. Kitts and Nevis’ presence will soon be felt in Trinidad when local soca sensation Nicha B. takes the stage.

The 2015-2016 National Groovy Soca and Super Soca Monarch king Nicha Byron, also known as Nicha B, departed the federation on Tuesday night, for Trinidad where he will be competing in the International Soca Monarch.

Byron said he is thrilled about being able to represent St. Kitts and Nevis in such a big way. He described it as “an honour.”

“I never expect it but they say things come in due time so we just being patient and now, we just got to go down there and be focused, keep to me A game and just focus and just try to bring back home the crown,” he said, noting that “it’s a lot of people, 70 people, so it’s way different to the whole St. Kitts thing so I just have to keep focus and push myself to the fullest.”

Nicha B. will be featured alongside Trinidadian Soca Star Benjai, who travelled to St. Kitts last year to remix the popular “Can’t Wait” song. Benjai then returned to St. Kitts in December and was featured on the Soca Monarch Show alongside Nicha B.

Carnival Chairman Noah Mills was among the persons at the Robert L. Bradshaw International Airport to witness Nicha B’s send off. He also had words of encouragement for the young artiste.

Meantime, the Department of Culture’s Music Specialist, Nigel Williams represented the country’s ministers of tourism and culture, the Hon. Lindsay Grant and Hon. Shawn Richards at the farewell exercise.

Meantime, popular entertainer Sandra Byron or Sandra B. also had words of commendation for her son.

“Nicha B. is my first born son,” she said, adding “as a young fella, a little here and there but God has been good to him and I’m very proud of him today, very very proud of him that he has reached that milestone that he can go off and represent St. Kitts in a big way,” she said.

“All my best, I put all my best to him and I hope the country itself will put their best into him and he will bring back home the crown for St. Kitts and make us all proud. I love him very much,” she added.

The International Soca Monarch is set for January 17th and 18th. It will feature 70 performers with Nicha B. singing in the tenth position.