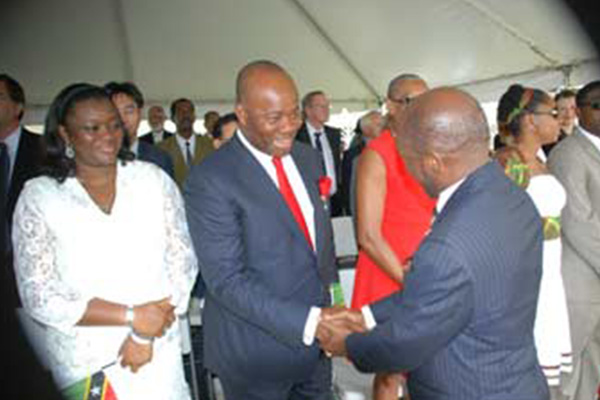 Basseterre, St. Kitts (SKNIS): The Joseph N. France (JNF) General Hospital is the recipient of a generous donation of over US$50,000.00 from Executive Governor of the Nigerian State of Akwa Ibom, His Excellency Chief Godswill Akpobio.

His Excellency Chief Akpobio made good on his commitment to contribute to JNF after touring the health institution when he visited the Federation to attend the 30th Anniversary celebrations of the Independence of St. Kitts and Nevis, Septermber 19, 2013.  The cheque was handed over to Ambassador Her Excellency Astona Browne who headed a delegation to the African State in December 2013.

Upon her return to the Federation, Ambassador Browne handed over the cheque to Prime Minister the Right Honourable Dr. Denzil Douglas who thanked the Nigerian Stateman for his country’s generosity, noting that the gesture was a token of friendship from His Excellency Akpobio.  He was described as “a tremendous Ambassador for his country, building bridges for many countries, in particular St. Kitts and Nevis.”  Prime Minister Douglas reflected on Governor Akpobio’s visit to the JNF General Hospital.

“I’m sure as he walked through the wards of the hospital on that morning,” Prime Minister Douglas noted.  “He was moved by what he described as the cleanliness of the hospital, the service that was being provided and the professionalism that was displayed by the Medical Superintendant and the staff – both doctors and nurses.  He wanted to make sure that we maintain the high standards that he saw, and wanted to make a contribution to sustain that.”

In accepting the cheque on behalf of the Ministry of Health, Minister responsible for that sector Honourable Marcella Liburd asked that the gratitude of her ministry be conveyed to His Excellency Governor Akpobio.

“We thank him for following through on his commitment,” Minister Liburd remarked.  “I also wish at this point to convey as the Minister of Culture, our gratitude through you Ambassador [Mrs. Browne] to him for hosting the St. Kitts and Nevis Choir, there [Nigerian State of Akwa Ibom] for a week.  And I understand that the performance was just extraordinary, we didn’t expect anything less.  I want to commend all those – Clyde Richardson and all those who were responsible for ensuring that we produce the best and represented our country extremely well.”

The cheque was then passed to the JNF Medical Chief of Staff Dr. Cameron Wilkinson who accepted on behalf of the JNF staff and all who access services there.

“I want to say how grateful we are for this contribution and I realize that everybody kept saying contribution, but it’s a gift of over US$50,000.00, that will go a very long way in making the lives of persons who access care there great,” Dr. Wilkinson stated.  We plan to buy a number of equipment so that you will see something tangible being done with it.  When the governor was here I assured him that whatever we bought , we would install it in his wife’s name, so that the next time he comes he will see it, and he promised that maybe he might quadruple the gift.  So thank you very much.”