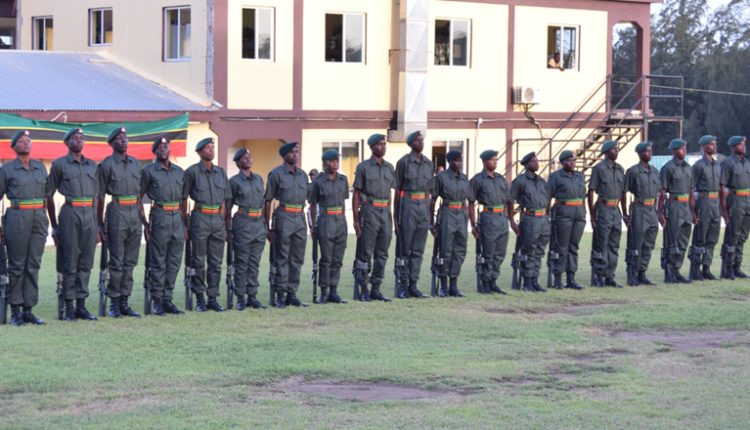 (SKNIS): Nineteen (19) recruits passed out as soldiers on August 17, after successfully completing the Basic Military Course No. 19, which ran for 17 weeks. They all participated in the Passing out Parade at Camp Springfield, which marked their official transition into the St. Kitts-Nevis Defence Force.

Warrant Officer Class Two (WO2), Althea France, Course Officer, gave a brief outline and overview of the course, noting that the Passing out Parade was the culmination of one of the most challenging, grueling and exciting periods in a soldier’s budding military career. WO2 France complimented all recruits for a job well done.

“After orientation, the explanation of the chain of command and the administrative preparation for the recruits were finally put in place; the course was officially opened by the force commander on the 24 April 2017. As the course progressed, 11 fell along the way for various reasons. The course officially concluded on 17 August, 2017, with 19 recruits (14 males and 5 females) passing out to become private soldiers. One recruit was recycled for the next course.”

She said that the objective of the course was to produce physically fit, loyal, disciplined and competent soldiers, who possess the fundamental skills necessary for service in the St Kitts-Nevis Defence Force. The major part of the training was conducted at Camp Springfield. The field training exercises were conducted in Wingfield and Phillips mountains.

For the BMC there are two compulsory subjects for graduation that students had to pass: Map and Compass, as well as Physical Fitness. Of the 19 graduating recruits, WO2 France said that eight were able to meet a much higher grade than the required standard, nine recruits frequently performed above the required standard, while two recruits met the required standard. Special awards went to several students: best at map reading – Dorville Eddy; best at field craft – Sherika Jhagroo; Best in physical fitness – Kiran Malcolm; best in drills – Caleb Davis; best pistol shot – Dishon Rawlins; most improved student – Kenroy Pemberton; and Clyon Saunders received awards for best rifle shot, most disciplined student and best graduating student.

Commander of the Defence Force, Lt. Col. Patrick Wallace said, “as you conclude the first stage of your military career, I hope you remember the lessons learned and the friendships formed during your basic military course. Be proud of your uniform. Be proud of serving your country. I want you to know that the whole nation is grateful for your service. Stand tall and proud; remember you worked hard. Your achievements are well deserving. Use these to spur yourself to greater heights, not just in the force, but throughout your life.”

Prime Minister and Minister of National Security, Dr. the Honourable Timothy Harris, told the recruits that the country needed more men and women in uniform and wished them well. Mrs. Cynthia Morton who gave a motivational speech to the recruits during their training told them that she was impressed with their interest and desire to make the country proud.