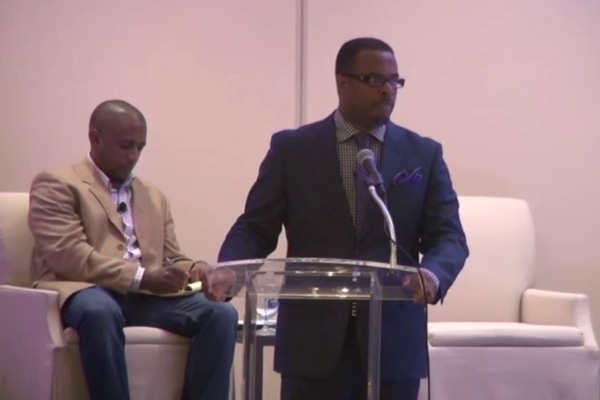 (ZIZ News) — Several of Nevis’ top tourism officials, the Governor of the Eastern Caribbean Central Bank and local tourism stakeholders, gathered at the Four Seasons Resort on Saturday for the Nevis Tourism Authority Marketing Retreat and State of the Industry Panel Discussion.

In his welcome remarks, Chief Executive Officer of the Nevis Tourism Authority (NTA), Greg Phillip, said the retreat and panel discussion were created to encourage an open exchange of ideas among the island’s tourism stakeholders.

He added that the NTA was working hard to promote and advance tourism on the island.

“Today, our team will show you a clear picture of the foundation that we have built and also give you a chance to influence the things we do in the future. This is simply your invitation to participate,” he said.

Acting Chairman of the NTA, Gary Colt, remarked on the importance of tourism to Nevis’ economy. He referred to tourism as the “backbone” of employment on the island.

“You all know that you’re stakeholders in the driving force of the Nevis economy and especially the backbone of employment on this island. The role that we all play will reflect upon the entire Nevis communist. Therefore, I think everyone sitting here is an extremely important person and the companies you represent are very vital to the survival of our country,” he said, adding that “In our meeting today, the board of the NTA, its CEO and its team, are hopefully wishing that you’ll be able to raise questions and concerns so that we can work hard for you throughout the next year.”

Nevis’ Deputy Premier and Minister of Tourism, Hon. Mark Brantley, said a priority of his Ministry is finding a way to eliminate the off season lull which annually affects hundreds of persons.

“Our stated objective is to eliminate the dreaded off season and we’ve been working really hard from a Ministry point of view and a marketing point of view to eliminate that off-season. Eliminate that lull that we’ve grown so accustomed to in Nevis. We’re doing that in various ways. I would hope that when the discussion commences we would have an opportunity to explore some of those ways that we have employed and ways indeed that we can employ going forward,” he said.

The ECCB Governor, Sir K. Dwight Venner, addressed the gathering on the transformational role of tourism in the economic development of the economies of St. Kitts-Nevis and the Eastern Caribbean Currency Union.

Also among the presenters was President of the St. Kitts and Nevis Tourism Association, Nicholas Menon.