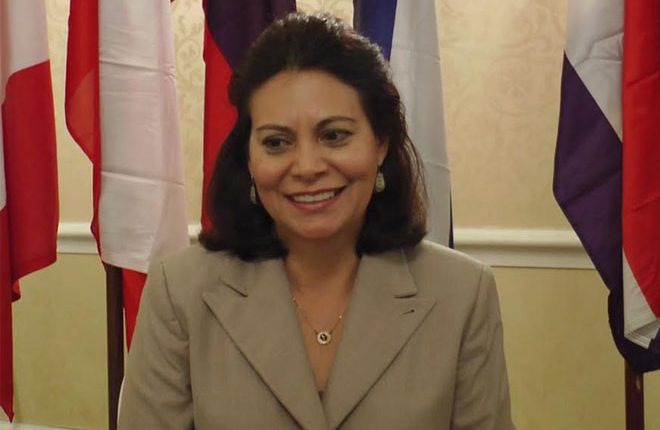 Basseterre, St. Kitts (SKNIS) — Officials at the Organization of American States (OAS) have thanked the government of St. Kitts and Nevis and several private entities for the close partnership that resulted in a successful 33rd Model OAS General Assembly for Universities of the Hemisphere.

Yadira Soto, Senior Advisor to the OAS Assistant Secretary General said the deliberations were of a high quality, which was testament to the preparation of the students and the coordination of the conference activities.

“I love St. Kitts and Nevis and I thoroughly enjoyed being part of this,” she stated. “As an advisor on youth, I really see that we need to do more to have these kind of exercises. That we really need to give our youth opportunities to share their knowledge and show their creativity.”

The model session debated three topics. The General Committee considered the “Hemispheric commitment to prevent the migration of youth as a result of lack opportunities in their communities.” The Second Committee reviewed “changes in cannabis policies that include options such as decriminalization, medical and non medical supply and uses of cannabis”, while the Third Committee debated “building capacity and resilience for the most vulnerable communities to prevent and mitigate disasters in a changing climate.”

“What we do is we share these resolutions with the authorities in Washington D.C., with the political bodies and we share them in the hopes that they can see some of the innovative work that the young people can do in the Americas towards solving our problems.”

Given the success of the 33rd MOAS and the support of partners, Ms. Soto indicated that serious consideration will be given to host additional Model sessions in a CARICOM country.

“We will work towards another MOAS in the Caribbean,” she said. “We already started informal talks with a few of the countries that attended this MOAS so we have our fingers crossed and we definitely are going to push for this.”

The MOAS 2015 was held at the St. Kitts Marriott Resort from March 24 to 26. It was attended by university students from Peru, Belize, Mexico, Trinidad and Tobago, Suriname, Guyana, Grenada, the United States and host St. Kitts and Nevis. However, the students were assigned to represent different countries. There were 16 OAS member delegations in total.