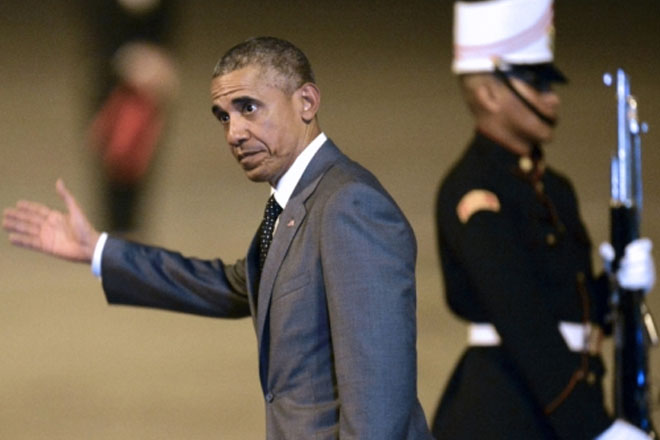 Panama City, Panama — US President Barack Obama and Cuba’s Raul Castro will put aside decades of Cold War-era tensions Friday, sitting at the same table with other regional leaders for a landmark summit.

Obama and Castro will join some 30 other presidents at the two-day Summit of the Americas in Panama City, breaking bread at a seaside dinner in a complex of ruins from the era of the Spanish conquistadores.

Their chief diplomats, US Secretary of State John Kerry and Cuban Foreign Minister Bruno Rodriguez, made history themselves when they held talks Thursday evening.

It was the first meeting between the chief diplomats of the two nations since 1958, a year before Fidel Castro’s revolutionary guerrilla seized power.

In a bombshell announcement, the countries revealed in December they had agreed to restore diplomatic ties. Talks have started.

Kerry and Rodriguez “had a lengthy and very constructive discussion this evening. The two agreed they made progress and that we would continue to work to resolve outstanding issues,” a State Department official said in a brief statement.

While the meetings are packed with powerful symbolism, the two countries have a long road ahead in their broader goal of normalizing relations.

An Obama-Castro meeting is “part of the overall negotiations that are taking place,” said former Cuban diplomat and foreign relations professor Carlos Alzugaray. “This doesn’t end with Raul’s presence at the summit; it’s the beginning.”

Obama acknowledged as much on Thursday during a visit to Jamaica, before landing in Panama.

“I never foresaw that immediately overnight everything would transform itself, that suddenly Cuba became a partner diplomatically with us the way Jamaica is, for example,” he said. “That’s going to take some time.”

The US leader may bring to the table a resolution to an old gripe from Cuba, as a senator said the US State Department recommended that he remove Havana from a list of state sponsors of terrorism.

Cuba’s inclusion on the blacklist, which includes Iran, Syria and Sudan, has been a major sticking point in negotiations to reopen embassies that closed after relations broke in 1961.

Cuba was first put on the blacklist in 1982 for harboring ETA Basque separatist militants and Colombian FARC rebels.

Removing Cuba from the terror-sponsor list would not be immediate. Congress would have 45 days to decide whether to override Obama’s recommendation.

US lawmakers who have been critical of the diplomatic detente could seize on the review of the list to further attack Obama’s Cuba policy.

Cuba has other major demands, most importantly that the US Congress lift an embargo that the communist regime blames for the island’s economic troubles.

Washington wants Cuba to lift restrictions on the movement of its diplomats on the island, giving them unfettered access to ordinary Cubans.

The reconciliation appears popular in both countries.

A Marist College poll showed this week that 59 percent of Americans back the diplomatic thaw, while a survey by US pollster Bendixen & Amandi International in Cuba found that 97 of islanders are in favor.

But Cuban government supporters confronted dissidents on the sidelines of the summit, heckling them as they attended a civil society forum.

A meeting between Castro and Obama at the summit will provide a picture moment to immortalize the diplomatic thaw that they announced in December.

The two leaders briefly shook hands at Nelson Mandela’s funeral in 2013, but they now have a chance for more face time.

The White House said the two would have time to interact, but the extent of the encounter remains a mystery and could fall short of a formal, bilateral meeting.

But as Obama moves to remove an old source of tension in US relations with Latin America, a new headache has emerged since he imposed sanctions against Venezuelan officials accused of human rights abuses in an opposition crackdown.

Venezuelan President Nicolas Maduro, Havana’s main ally in the region, said Thursday he had gathered 13.4 million signatures in a petition urging Obama to lift his executive order, which calls Caracas a US national security threat.

Maduro welcomed White House statements saying it does not see Venezuela as a threat after all.

But, he added, “I ask Obama why he signed this order. If he doesn’t answer … it will be impossible to open a new era” in US-Venezuelan relations.