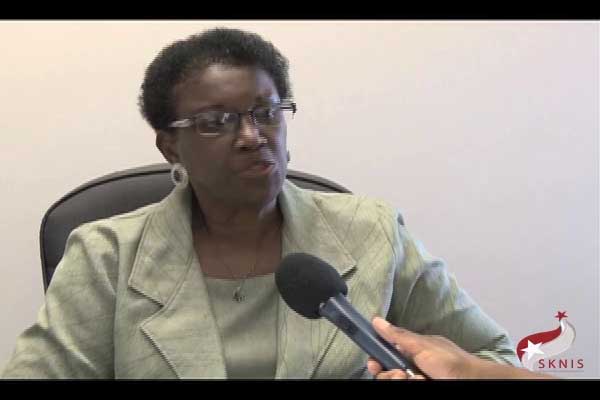 Basseterre, St. Kitts — Hazel Thompson-Ahye, Legal Consultant of the OECS Juvenile Justice Reform Project has emphasized the importance of looking out for the best interests of children.

She made the remarks when speaking at a two-day capacity building workshop for juvenile justice workers held in St. Kitts and Nevis.

Mrs. Thompson-Ahye explained that according to the United Nations Convention on the Rights of the Child, the issue of non-discrimination is critical to juvenile justice reform.

Thompson-Ahye further stated that due to her work in other institutions she was able to share expertise on diversion which is the process of finding means of rehabilitating offenders of the law without necessarily detaining them.

“So we’re looking at a number of diversionary processes and in fact, in St.Kitts, talks about family group conferencing, talks also about restorative justice. I’m also a trainer with the International Institute of Restorative Practices, so I’ve shown them videos showing how you run a conference. How you bring together the victim and the offender and their family support. When an offense is committed it’s not just an offense against the state. It’s an offense against somebody,” she said.

However, Lyndel Archibald, coordinator of the Juvenile Justice Reform Project said a legislative review had to take place to harmonize the laws across the OECS territories.

“We’re all signatories to the CRC and all other international Conventions but on our books it didn’t reflect that we had signed on to those conventions because we were not implementing what those Conventions demanded of us,” she said. “We did have a consultant that went through all the islands reviewing all of the laws. So right now every member has a directory of laws pertaining to juveniles and children. And that is one of the reasons why St.Kitts was able to pass the Child Justice Bill. There are three other countries that haven’t passed this as yet and before this project ends we intend to work with them to make sure that they pass those laws in support of our children.”