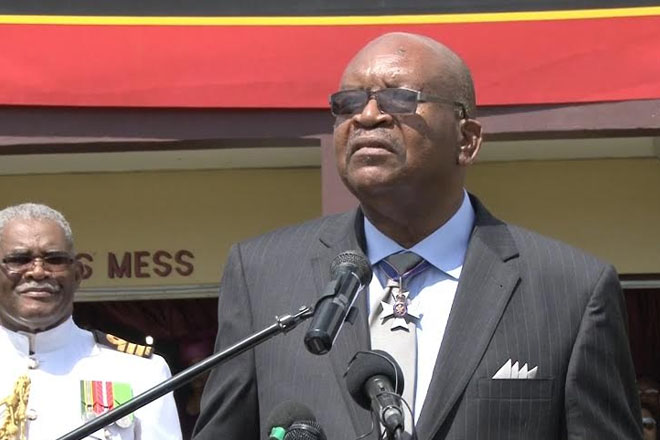 Officials Toast To The Nation

(ZIZ News) — Top government officials joined residents of and visitors to St. Kitts and Nevis, on Saturday, raising their glasses in a toast to the nation on achieving its 32nd anniversary of Independence.

The annual Toast to the Nation took place at the Headquarters of the St. Kitts and Nevis Defence Force at Camp Springfield.

As the Federation’s Representative to the Crown, Governor General His Excellency Tapley Seaton CVO, QC, JP raised a toast to Her Majesty the Queen.

“Her Majesty has recently become the longest reigning monarch in the United Kingdom and we certainly want to congratulate her on that and for the very fine example she has shown in discharging her duties,” he said.

A number of foreign diplomats attended the Independence Day Parade and Toast to share in the celebration, including Vice President of the Bolivarian Republic of Venezuela Jorge Arreaza and Minister Delcy Rodriguez.

Ambassadors from the Republic of China, Taiwan, Cuba and Brazil along with representatives from Argentina, Russia, the European Union, Britain and the United States were also on hand for the occasion.

Prime Minister, The Hon. Dr. Timothy Harris spoke of the importance of the relationships with these nations.

“Without the cooperation and support of these and other countries, the advancement and progress of our Nation would not move as smoothly as we would like. And so we are happy for the friendships and we are happy that their governments value our friendship and cooperation at a sufficiently high level for their senior representatives to come and to celebrate our independence,” he said.