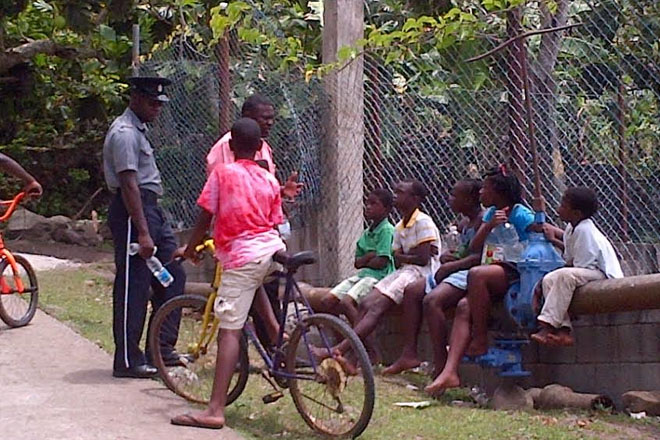 (ZIZ News) — On Thursday 9th July 2015 between 9:30 am and 1:00 pm, Police Officers and Soldiers of the St. Kitts and Nevis Defence on Nevis continued their joint operations to fulfil the Crime Fighting Mandate. The operation was geared towards a meet and greet with residents in Rawlins Village, Gingerland.

During the operation fifteen (15) abandon houses and a number of empty lots of land were searched for Controlled Drugs, Fire Arms and Ammunition, and implements used in the commission of crimes. Three (3) vehicles and their occupants were searched, also, a number of pedestrians.

However, one hundred (100) mature Cannabis plants, ranging from one (1) foot to five (5) feet in height were found growing in pots in a Ghaut. They plants were uprooted and taken into police custody for destruction; no one was made answerable for the find.

The interaction with a number of residents was very positive as many of them were pleased to the members of the security forces moving through their area. The residents expressed their concern about the poor street lighting in the village and the over grown vegetation on unoccupied properties. The residents were assured that their concerns will be sent to the relevant persons/departments.

Superintendent Hilroy Brandy, Divisional Officer of the Nevis Division, expressed his sincere thanks and appreciation to the residents for their cooperation and sharing of information with the Security Forces.