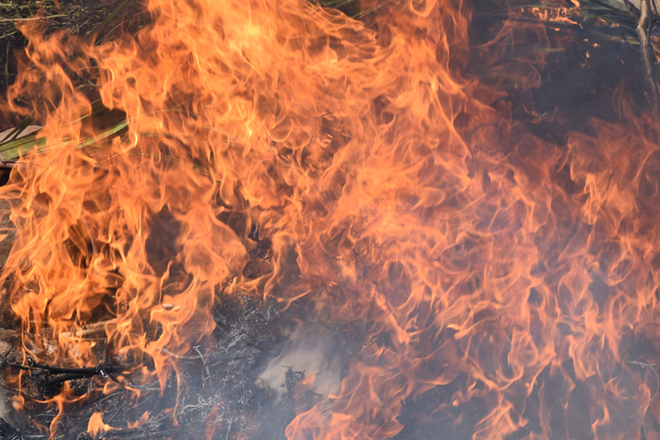 ‘Operation Safe Streets’ sends a lot of ‘weed’ up in smoke

(RSCNPF): A controlled burn by a combined law enforcement team in support of “Operation Safe Streets” resulted in a large quantity of marijuana going up in smoke on Friday (September 30).

The burn at a secured location saw the destruction of over 31,000 marijuana plants seized during “Operation Safe Streets” and a large quantity of plants seized in previous St. Kitts Nevis Defence Force marijuana eradication operations.

On the fire being fed by discarded pallets and a few automobile tires were the plants ranging in size from one (1) foot to eleven (11) feet.

“This has been one of the largest burns we have done,” said Superintendent(Ag) Travis Rogers as he monitored the raging fire being tended by officers of a combined team in support of “Operation Safe Streets”.

“Operation Safe Streets” is a law enforcement operation led by the Royal St. Christopher and Nevis Police Force with a goal to rid our communities of illegal firearms and ammunition, illegal drugs, and instruments that can be used to commit crimes. The Police is supported by the St. Kitts Nevis Defence Force, Her Majesty’s Customs and Excise Department and the Regional Security System(RSS). “Operation Safe Streets” was launched on Tuesday (September 20).