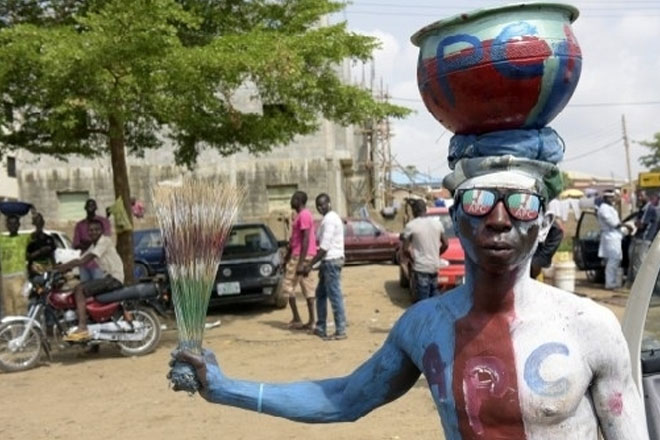 More than half of Nigeria’s states have declared returns in the vote pitting Jonathan against the former military ruler in the closest election ever in Africa’s most populous country and biggest economy.

Buhari, making his fourth run at the presidency, has been buoyed by frustration over endemic corruption, criticism over Jonathan’s handling of the Boko Haram insurgency and a stronger opposition.

The 72-year-old built his early lead in northern states dominated by the mainly Muslim, Hausa-Fulani ethnic group of which he is a member.

Jonathan won near total support of 98.4 percent in his home state of Bayelsa in the southern, oil-producing Niger Delta, with the key state of Rivers yet to declare, which could offset his losses.

But the win in Lagos in the southwest was a boost for Buhari, with the state seen as a key battleground and countrywide support essential for a win.

So far, Buhari and his All Progressives Congress (APC) have won 12 states, with Jonathan, of the Peoples Democratic Party (PDP) on 11 plus the Federal Capital Territory of Abuja.

There was a brief protest by the PDP before the count resumed, with former Niger Delta minister Godsday Orubebe accusing elections chief Attahiru Jega of being “partial” and “selective”.

Orubebe claimed Jega had refused to investigate PDP complaints about huge margins won by Buhari in northern states but had launched a probe into APC claims of irregularities in Rivers.

Jega said later: “I don’t believe that the allegations are substantial enough to require the cancellation or rescheduling of the elections in Rivers state. We will take the results.”

The PDP, which has controlled the presidency since the end of military rule in 1999, said the early returns were no cause for concern.

“The(PDP) is unperturbed by the results of the elections so far,” spokesman Olisa Metuh said in a statement.

“The results from (PDP) strongholds will overwhelm those from the (north) and give it a clean and clear victory at the end of the day,” he added.

But Buhari may be encouraged by tallies from two northern states, where he stretched his lead over Jonathan compared to four years ago.

In Kano, the 72-year-old defeated Jonathan by nearly 1.7 million votes after besting the president by roughly one million in 2011.

Heavily populated Rivers state in the Niger Delta and the economic capital Lagos are among the key areas yet to declare.

International observers gave broadly positive reactions to the conduct of the vote, despite late delivery of election materials and technical glitches with new voter authentication devices.

Nigeria’s Transition Monitoring Group, which had observers across the country, said: “These issues did not systematically disadvantage any candidate or party.”